official Youtube Channel: Liz Gillies
Elizabeth Egan Gillies (born July 26, 1993) is an American actress and singer. Her first television appearance was in The Black Donnellys (2007). From 2010 to 2013, she played Jade West in the Nickelodeon series Victorious. She had a main role in the FX comedy series Sex & Drugs & Rock & Roll (2015–2016). Since 2017, Gillies has starred as Fallon Carrington in The CW's series Dynasty, a reboot of the 1980s series of the same name.

Gillies made her Broadway debut at age 15 in the musical 13, playing the character of Lucy. She has also appeared in feature films, including the horror film Animal (2014) and the comedy film Vacation (2015).

Life and career
1993–2007: Early life and career
Gillies was born in Haworth, New Jersey. She has one younger brother, born 1996. Gillies has stated that she is Irish and has an Italian grandmother and great-grandmother.

Gillies' acting career began at age 12, when she started going to local open casting calls. She quickly began appearing in commercials for companies such as Virgin Mobile.

Her first television role was as a recurring character in The Black Donnellys. She has stated that she was not allowed to watch the finished show in its entirety because her parents felt it was not appropriate for her at the time. She appeared in three episodes.

In 2008, she played small roles in The Clique, Harold, and Locker 514. That year she was also cast as Lucy in a Goodspeed production of Jason Robert Brown's new musical 13, alongside her future Victorious co-star, Ariana Grande. Later that year, 13 moved to Broadway, which made it the first Broadway production to have a cast and band entirely made up of teenagers.

Gillies remained with the production until its closure on January 4, 2009. 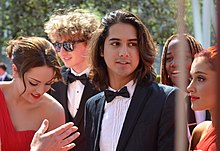 In 2010, Gillies was cast as bad girl and occasional antagonist Jade West in the Nickelodeon television show Victorious, a sitcom revolving around teenagers at a performing arts high school in Hollywood. This marked her second time working alongside 13 co-star Ariana Grande. Regarding her Victorious character, Gillies said "It's wonderful. I love playing Jade. I always say she's not so much the 'mean' girl, but the 'bad' girl in so many ways. She has a lot of human qualities to her – she's not just completely sociopathic. She's sweet with her boyfriend. It's nice to play a character with some depth." The show premiered on March 27, 2010. During her time on Victorious, Gillies was featured in several songs on the soundtracks Victorious and Victorious 2.0, including "Give It Up" (duet with Ariana Grande), and "Take a Hint" (duet with Victoria Justice). She also wrote and recorded the song "You Don't Know Me" for an episode of Victorious, and it was later featured in Victorious 3.0.

She lent her talents to other Nickelodeon shows, voicing the character of Daphne on the animated series Winx Club and recording Winx Club's official song, "We Are Believix." She also appeared in an episode of Big Time Rush and as a contestant on BrainSurge and Figure It Out.

Beginning in 2012, Gillies began playing small guest roles outside Nickelodeon. Notable appearances include White Collar and The Exes. In July 2012, it was reported that Gillies was working on an alternative rock album. Victorious ended on February 2, 2013, after four seasons. Following the cancellation of the series, Gillies took some time off from acting.

In 2013, she was cast as Courtney in the musical adaptation of Jawbreaker and participated in a reading of the show in Manhattan. The musical did not end up being taken to Broadway. On December 10, 2013, Gillies recorded a duet with Ariana Grande called "Santa Baby" for Grande's Christmas EP Christmas Kisses.

In 2014, Gillies appeared in the horror film Animal as Mandy and the Lifetime movie Killing Daddy, playing Callie Ross. Animal was filmed in the summer of 2013 in Manchester, Connecticut, and was produced by Drew Barrymore. The film also features Gillies' former Winx Club co-star Keke Palmer and was released on iTunes June 17, 2014.

2015–present: Further acting
In 2015, Gillies was cast as Heather in the remake of Vacation. The film received a wide release on July 29, 2015. She was then cast in the comedy series Sex & Drugs & Rock & Roll as Gigi, an aspiring singer and daughter of a former rock star named Johnny Rock (portrayed by the show's creator Denis Leary). The show premiered July 16, 2015 to mixed reviews, but Gillies' performance as Gigi was well received. The show ran for two seasons, with the second-season finale airing on September 1, 2016. On September 9, 2016, FX declined to renew the show for a third season, effectively canceling the series.

In 2017, Gillies was cast as Fallon Carrington in The CW television series Dynasty, a reboot of the 1980s series of the same name. After Nicollette Sheridan left the role of Fallon's mother Alexis Carrington near the end of the second season, Gillies began playing the character temporarily, as well as continuing to portray Fallon.