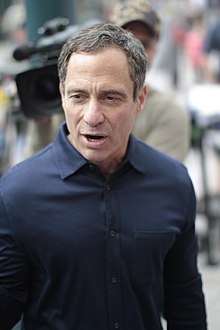 Early life and education
Levin was born September 2, 1950, in Los Angeles County, California to a Jewish family. He attended high school at Grover Cleveland High School in Reseda, Los Angeles and graduated in 1968 with honors. Levin attended the University of California, Santa Barbara, where he graduated with a B.A. in political science in 1972. He later attended the University of Chicago Law School and graduated with a J.D. in 1975.

Career
Early law career and academia
Levin was an active attorney in the state of California from December 18, 1975, until January 1, 1996. In the mid-1970s, Levin taught law at the University of Miami School of Law under Soia Mentschikoff. He briefly practiced in Los Angeles before returning to teach at Whittier College School of Law.

The introduction and debate surrounding California Proposition 13 in 1978 pushed Levin into the public's eye following his performances in a number of public debates. With his newfound fame, he started to contribute legal advice on a radio show where he was nicknamed "Doctor Law", as well as write columns for the Los Angeles Times. His columnist career with the Times spanned seven years.

In 1997 he was named co-executive producer and on-air legal anchor for The People's Court which made him a Warner Bros. legend. He created Celebrity Justice, which ran from 2002 to 2005.

Levin produced Beyond Twisted, which aired in 2009 for one season before being cancelled. He created Famous in 12 (2014), an experiment in exploiting a family for quick fame, but the show was cancelled after less than one season, with only five of the scheduled twelve episodes having aired.

Since 2016, Levin has hosted the weekly prerecorded show OBJECTified on FOX News Channel.

TMZ
Main article: TMZ
This is not television. It's rawer, it's urgent, it's less produced. I really think this is the future. People want to get what they can get on-demand, and they have as much access to a computer as they do a TV set.
—Levin in a 2005 interview with Television Week
In 2005, AOL and Telepictures Productions launched TMZ with Levin as the founder and managing editor. The website quickly rose to prominence when it broke the story of Mel Gibson's DUI arrest and subsequent antisemitic rant. It continued to breaking a number of high-profile stories including the abuse of Rihanna by Chris Brown, the deaths of Heath Ledger, Brittany Murphy, and Michael Jackson. The Los Angeles Times named TMZ's coverage of the Jackson death as the biggest story the website had covered to date.

Levin met with President Donald Trump on March 7, 2017 in the Oval Office and chatted for an hour.

Other ventures
Harvey Levin Productions has produced Levin's media projects since he joined The People's Court in 1983. In 1985, Levin wrote The People's Court: How to Tell It to the Judge, reviewing and providing commentary on several cases from the show. The Library Journal "recommended [the book] for public libraries."

Personal life
Levin appeared as an event speaker for the National Lesbian and Gay Journalists Association in April 2010 in which he publicly confirmed his self-identification as gay. He discussed his fear of losing his career if someone were to find out, which led to Levin compartmentalizing his personal and professional lives.

Levin's longtime partner is Andy Mauer, a Southern California chiropractor. The two own multiple properties together, sharing joint-deed listings since the late 1990s and early 2000s.

Categories: 1950 births,American infotainers,American businesspeople in the online media industry,American Jews,Television producers from California,Fox News people,LGBT entertainers from the United States,Lawyers from Los Angeles,University of California Santa Barbara alumni,University of Chicago Law School alumni,Whittier College faculty,Jewish American attorneys,LGBT JewsLGBT producers,LGBT lawyers,LGBT broadcasters from the United States,Gay writers,Gay actors,LGBT people from California
Lauren London Wiki Dave Goldberg Wiki
Disclaimer: The above information is for general informational purposes only. All information on the Site is provided in good faith, however we make no representation or warranty of any kind, express or implied, regarding the accuracy, adequacy, validity, reliability, availability or completeness of any information on the Site.