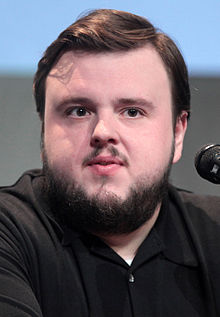 Early life and education
Bradley was born and grew up as a Catholic in the Wythenshawe district of south Manchester and attended St Paul's Roman Catholic High School. He has a sister who is 13 years older than he.

In 2005, he began attending Loreto College in the Hulme area of Manchester, where he studied Drama and Theatre Studies. He graduated from Loreto in 2007. He received a BA (Hons), Acting at the Manchester School of Theatre, graduating in 2010.

Career
Three months after he graduated from drama school, in his first audition, Bradley won the part of Samwell Tarly in the 2011 HBO fantasy TV series Game of Thrones. His character is a friend of Kit Harington's Jon Snow and provides occasional comic relief, especially in season 1. As the series has progressed, Bradley's Tarly has developed significantly.

One reviewer called him "a wonderful comedic and cowardly yin to Jon's dour yang". George R. R. Martin said that the character that Bradley portrays is the character he would be, if he were on the show.

In 2012, Bradley played the character Tyr Seward in the BBC production of Merlin in series 5, in the episode "A Lesson in Vengeance."

Also in 2012, Bradley appeared on the Channel 4 TV series, Shameless, in the role of Wesley, Frank Gallagher's boss, in two episodes of series 10.

In 2015, Bradley played the role of Miloš Hrma in the BBC Radio Salford radio play production of Closely Observed Trains.

In 2018 Bradley appeared in the film Patient Zero, starring alongside Stanley Tucci and fellow Game of Thrones star Natalie Dormer

Personal life
Bradley is a Manchester United supporter and plays the drums.
Bradley has been in a relationship with entertainment journalist Rebecca April May since 2017.