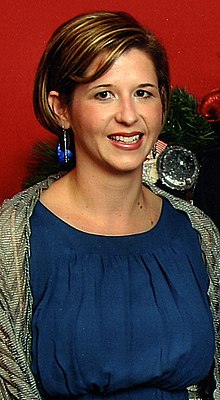 Ashley Estes Kavanaugh is an American public official and former political aide. She has been married since 2004 to U.S. Supreme Court Justice Brett Kavanaugh.

Career
Estes Kavanaugh served as an assistant to George W. Bush from 1996 through 1999, during his tenure as Governor of Texas and his presidential campaign in 2000. When Bush became President in January 2001, Estes Kavanaugh took the position of Personal Secretary to the President; she served in that position through 2004.

Since 2016, Kavanaugh serves as town manager of the village of Chevy Chase Section Five, Maryland, a job she does mostly from home; her annual salary is $66,000.

Education and personal life
Estes Kavanaugh was born in Abilene, Texas. Little has been reported about her parents. She graduated from Abilene Cooper High School in 1993, where she was a member of the Student Council for three years and played golf for three years. She attended the University of Texas at Austin, beginning in 1993, and graduated in 1997 with a Bachelor of Journalism degree.