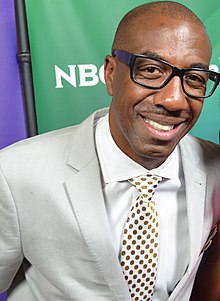 Jerry Angelo Brooks (born December 16, 1965), is an American actor, writer, comedian and voice actor. He performs stand-up under the name J. B. Smoove. He started his career off with the television series Def Comedy Jam in 1995. He plays Leon on the HBO series Curb Your Enthusiasm. He also starred on the CBS sitcom The Millers from 2013 to 2015. He portrayed a fictionalized version of himself on the BET improv-comedy reality television parody Real Husbands of Hollywood.

Early life
Smoove was born in Plymouth, North Carolina, to parents Floyd and Elizabeth Brooks. From the time he was three years old, he grew up in Mount Vernon, New York. He spent a significant amount of time with his extended maternal family in the Plymouth area, which he has said inspired much of his comedy. In Mount Vernon, he grew up in the Levister Towers housing projects with his two younger brothers. Smoove's father died from diabetes when he was 15 years old.

Career
Smoove has had recurring roles on Everybody Hates Chris and Saturday Night Live. On SNL, he worked as a writer (and had bit roles in sketches, including playing Jimmy "JJ" Walker in a parody of the 1970s sitcom Good Times) and was a recipient of the 2007 Writers Guild of America award for Best Comedy/Variety Series (Including Talk). He was on Saturday Night Live for three years.

Smoove has been a regular cast member on the HBO comedy Curb Your Enthusiasm since its sixth season in 2007, playing Leon Black. Smoove got the role of Leon on Curb Your Enthusiasm after his stint on SNL. Although he was at that time based on the east coast, he was in Los Angeles for his friend, music producer Oji Pierce's funeral, so was able to audition for Curb. Smoove wrote a book as his Curb Your Enthusiasm character, Leon, which was released on October 10, 2017.

He had a major role for seasons two and three on the Fox network sitcom 'Til Death with Brad Garrett and Joely Fisher. In June 2008, he taped several episodes of The Gong Show with Dave Attell as one of the celebrity judges. Smoove was also a cast member on the short-lived sketch comedy program Cedric the Entertainer Presents. He hosted the standup comedy series Russell Simmons Presents: Stand-Up at The El Rey on Comedy Central in July 2010 and also appeared on an episode of The Simpsons titled '"Angry Dad: The Movie" in February 2011. Also in 2011, he starred in the American Dad! episode "The Worst Stan" and appeared in an episode of Kick Buttowski: Suburban Daredevil called "Dude, Where's My Wade".

In 2012, his first televised comedy special, JB Smoove: That's How I Dooz It, premiered on Comedy Central. The DVD of the special was released April 3, 2012. In 2013, Smoove voiced Hackus in The Smurfs 2. Smoove appeared in Movie 43 in the segment "The Proposition" alongside Anna Faris and Chris Pratt. He was the substitute co-host of the New York City morning talk show Good Day New York with Rosanna Scotto on April 9, 2012. He had a cameo as a grave digger in the episode of Louie entitled "Barney/Never". He also played a supporting role in Season 4, Episode 7 "The Vapora Sport" in the American sitcom The League on FX. He plays Wheelchair Guy, with whom the main characters have recurring comedic run-ins. He plays one of the "Replacers" for Call of Duty: Black Ops II. He is in the show Real Husbands of Hollywood, where he plays a fictionalized version of himself.

Smoove hosts a talk show on the MSG Network called Four Courses With JB Smoove. He provides the voice of Dr. Ray D'Angelo Harris, host of the Chakra Attack radio show in the video game Grand Theft Auto V. Smoove appeared in the 2013 film Dealin' with Idiots as Coach Ted. In 2013, he became a regular cast member of the CBS comedy The Millers, playing the character Ray.

In the summer of 2014, Smoove hosted the eighth season of the NBC reality series Last Comic Standing.

In 2019, Smoove attended the final dinner service of Hell’s Kitchen's eighteenth season Hell's Kitchen: Rookies vs. Veterans as a chef’s table guest in the blue kitchen that was run by runner-up Mia Castro. He appeared as a guest judge on the first season of the FOX reality singing competition The Masked Singer.

Philanthropy
Smoove serves on the board of directors of the Boys & Girls Club of Mount Vernon. On November 7, 2017, he emceed the Boys and Girls Clubs Future Leaders Gala at The Beverly Hilton in Beverly Hills, CA.

Personal life
In 2007, Smoove married singer Shahidah Omar. They have one daughter and live in Los Angeles. He shortened his name, Jerry Brooks, to "J. B." and added "Smoove" as his last name when he began performing stand-up comedy. He is a fan of the New York Knicks, New York Yankees and the New York Jets.

In 2019, Smoove played for the "Home" roster during the NBA All-Star Celebrity Game at the Bojangles' Coliseum in Charlotte, North Carolina. The roster was made up of celebrities with Carolina roots.