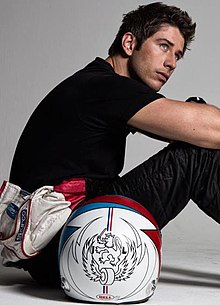 Arie Luyendyk Jr. (/ˈɑːri ˈlaɪəndaɪk/; Dutch: [ˈaːri ləjɛnˈdik]; born 18 September 1981) is a Dutch-American auto racing driver and son of two-time Indianapolis 500 winner Arie Luyendyk. He has competed mostly in North America where his father lives and made his career. Luyendyk is best known for competing in the Indy Lights Series where he finished 2nd, 3rd and 4th in the Championship over a number of years. He was named a test-driver in A1 Grand Prix alongside Jeroen Bleekemolen for A1 Team The Netherlands starting the 2007–08 season.

Luyendyk has competed in various sports-car series competing in the 12 Hours of Sebring and the 24 Hours of Daytona.

He was a contestant on ABC's dating competition The Bachelorette season 8 in 2012, where he placed first runner-up, and starred in the 22nd season of its sister show The Bachelor, which premiered on January 1, 2018.

Early life
Luyendyk was born in The Netherlands, to Arie and Mieke Luyendyk. At age 3, he immigrated with his family, including sister Maida, to the United States and settled in Brookfield, Wisconsin. Luyendyk has two younger twin brothers, Alec and Luca.

Career
Luyendyk began racing karts in 1992, and moved to Sports Car Club of America club Formula Ford competition six years later at the age of 16. He raced in a number of American junior formulae, notching wins in the Skip Barber Formula Dodge series and top five finishes the U.S. Formula Ford 2000 Championship. In 2001, Luyendyk finished third in the Formula Continental class at the SCCA National Championship Runoffs as well as winning the SCCA Southern Pacific divisional title on the strength of four wins in that same class.

Luyendyk did qualify for the 2006 Indianapolis 500 in a car owned by his father and backed by cheapcaribbean.com and Blue Star Jets. The team had limited practice time due to a second week engine program. However, his first race in the more powerful cars ended early due to handling issues, with Luyendyk finishing 54 laps out of 200 and ending in 28th place in the field of 33.

In the 2007-08 A1 Grand Prix season, Luyendyk drove for A1 Team Netherlands in the A1 Grand Prix World Cup of Motorsport as the team's "rookie driver". His best result was a fifth place training time at Round 5 held in Taupo, New Zealand. He has returned to the Firestone Indy Lights Series to race for AGR-AFS Racing as the teammate to Raphael Matos. He captured his first series win in the final race of the 2008 season at Chicagoland Speedway by passing Matos on a late race restart. Luyendyk would finish the 2008 season fourth in the Championship, recording five podium finishes.

In 2010, he returned part-time to Indy Lights and drove in the Freedom 100 for Andersen Racing and three other oval races for Alliance Motorsports. His best finish was seventh at Chicagoland.

In 2013, Luyendyk made the switch to off-road racing in the Stadium Super Trucks series, finishing seventh in points. In his partial season Luyendyk notched a heat win and three 4th-place finishes in seven starts.

During the 2018 Stadium Super Trucks season, Luyendyk recorded his first series win at Barbagallo Raceway in Perth, Australia. He scored a second victory at Detroit in June.

Television
In 2009, Luyendyk became the driver analyst for Versus broadcasts of Indy Lights races. In 2012 Luyendyk returned to the booth, commentating the Indy Lights races for the NBC Sports Network. He appeared as himself in season nine of Hell's Kitchen. The chefs visited the Grand Prix of Long Beach in which Luyendyk was participating.

Luyendyk placed second on the eighth season of the reality show The Bachelorette, starring Emily Maynard.

Luyendyk appeared in the first episode of the 17th season of The Bachelor. Luyendyk also competed on Wipeout: Summer Episode 7: "Bachelors vs. Bachelorettes", where he was eliminated early.

In 2017, it was announced that Luyendyk would appear in the 22nd season of The Bachelor. He asked Rebecca "Becca" Kufrin to marry him at the season finale however he later regretted rejecting Lauren Burnham, the runner-up, and tried to rekindle things with Burnham.

Personal life
Luyendyk works as a real estate broker for RE/MAX in Scottsdale, Arizona. He became engaged to the runner-up, Lauren Burnham of The Bachelor and Burnham moved to Scottsdale to be with Luyendyk. The couple married in January 2019. They have a daughter, Alessi Ren, born in May 2019. He appeared as an agent on a 2019 episode of HGTV's House Hunters International set in Amsterdam.