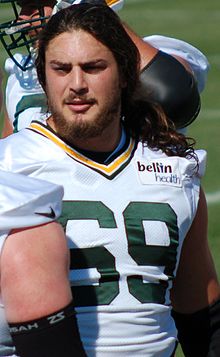 David Afrasiab Assad Bakhtiari (born September 30, 1991) is an American football offensive tackle for the Green Bay Packers of the National Football League (NFL). He played college football at Colorado, and was drafted by the Packers in the fourth round of the 2013 NFL Draft.

Early years
Bakhtiari was born in San Mateo, California. His older brother Eric Bakhtiari went on to play defensive end at the University of San Diego and for the Tennessee Titans. His father, Karl Bakhtiari, runs a real estate business in California. He is of Iranian and Icelandic descent.

He attended Junípero Serra High School in San Mateo, California, where he lettered two years in football and lacrosse, being named a team captain during his sophomore year. The most memorable[according to whom?] game of his high school career in football came against Sacred Heart Cathedral Preparatory, in which he held future USC Trojan Kevin Greene to no sacks and only allowed two tackles. In another game later in the season he had at least eight pancake blocks. He was named Honorable Mention All-West Catholic Athletic League, All-Metro (Bay Area), and All-San Mateo County as a senior when he helped lead his team to a 6–1 league record, winning the 2008 WCAL Co-Championship with Bellarmine College Preparatory, and made it to the CIF-CCS Open Division Semi-Finals, where they lost to the eventual champion Bellarmine Bells. He was also listed in the Bay Area News Group as number eight out of 25 players from northern California on their 2008 Cream of the Crop team.

Coming out of high school, Bakhtiari was six-feet-four-inches tall and weighed 266 pounds and was ranked only as a two-star prospect by Rivals.com. In a 2009 interview Bakhtiari commented: "People come up to me and go, 'Oh, you're only a two-star'. But I don't really care what my ranking is. All that matters is how you do when you put on the pads." He received interest from several schools, receiving offers and visiting Colorado, Utah, UTEP, and Washington before signing his letter of intent with Colorado.

College career
Bakhtiari decided to play for the University of Colorado, and majored in Communications while playing for the Colorado Buffaloes football team from 2009 to 2012. He redshirted as a true freshman in 2009.

During his first year on the field for the Buffaloes, he played in all twelve games, starting eleven. The one game he did not start was against Texas Tech, but he still was on the field for 24 snaps. He played the third-most snaps on the offense behind future New England Patriots and New York Giants offensive lineman Nate Solder and future Denver Broncos offensive lineman Ryan Miller with 796. Bakhtiari had 59 knockdown blocks which was fourth on the team, his highest number coming against Iowa State. He allowed one quarterback sack and seven pressures and was flagged for six penalties. During the game against Kansas that year he recovered an offensive fumble and returned it seven yards. For his efforts, he was named as an honorable mention for Freshman All-American honors by collegefootballnews.com. He was also a member of the All-Big 12 second-team for Academics.

Bakhtiari began his redshirt sophomore campaign by suffering a severe injury to his knee in the season opener against Hawai’i on the seventh play of the game. He missed the next two games against California and LSU. Regardless, he still started the remaining games (11 total). He allowed two sacks on the year and was flagged once the entire season. At the end of the year, he was named as a member to the All-Pac-12 second team by the league's coaches and Phil Steele.

Before his final season started, Bakhtiari was named to the preseason first-team All-Pac-12 squad. He started eleven games at left tackle, missing the game against Oregon with a knee sprain after attempting to play in the pre-game. He totaled 41 pancake blocks, and allowed 2.5 quarterback sacks and one pressure. His efforts gained him a spot on the watchlist for the Outland Trophy, and the Rotary Lombardi Award. Additionally, he earned second-team honors by the league coaches for the second year in a row.

On January 8, 2013, Bakhtiari announced that he had opted to forgo his senior season at Colorado and declare for the 2013 NFL Draft. He added that his declaration for the draft had nothing to do with Colorado's 1–11 season the year before and subsequent firing of head coach Jon Embree. Mike Macintyre, the new head coach of Colorado, said that the team would have loved to have him but would fully support him in his endeavors.

Professional career
After declaring for the NFL Draft, Bakhtiari has stated he received a second or third round evaluation from NFL Draft Advisory Board.

During the Packers' 'Family Night' inter squad scrimmage later in training camp, starting left tackle Bryan Bulaga succumbed to a torn ACL injury. Due to the injury and Bakhtiari's play during training camp, he was inserted as the starting left tackle in the Packers first preseason game against the Arizona Cardinals at Lambeau Field. Though they lost, it was later noted that one of the positives to take away was the steady play of the rookies. He later went on to start every game at left tackle for the Packers, becoming the first rookie to do so in Green Bay since the start of the 16-game schedule employed by the NFL since 1978 and the only NFL rookie to start every game that season at left tackle in 2013. He was a key contributor to Green Bay finishing seventh in the league for rushing (blocking for rookie running back Eddie Lacy) and sixth in passing for the first time since 2004.

Following his rookie season, Bakhtiari worked significantly on his strength and continued to fight for his job at left tackle, prompting the Packers to move Bryan Bulaga to right tackle and have Bakhtiari at left. Later in the current Packers season, he was placed on the injury report for the game against the Miami Dolphins due to a back injury. He played in all 16 games of his sophomore season as well as the 2 playoff games.

On September 13, 2016, the Green Bay Packers signed Bakhtiari to a four-year, $48 million contract extension that includes $16.7 million guaranteed and a $15 million signing bonus.

Personal life
Bakhtiari resides in Burlingame, California. While in high school, he created the Fund a Dream Scholarship, and also signed autographs at the Jerry Parins Cruse for Cancer in exchange for donations benefiting cancer research. He also visited homeless shelters and nursing homes while attending the University of Colorado.

Bakhtiari introduced the Packers to the board game Settlers of Catan which soon became a team favorite. He was also responsible for a group of Packers players appearing in Pitch Perfect 2, when he reached out to director Elizabeth Banks on Twitter.