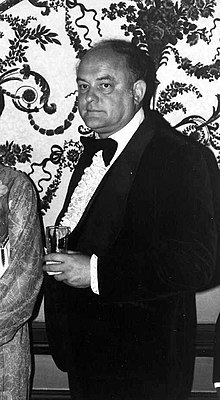 Early life
Born Alexander Gordon Jump, in Dayton, Ohio, Jump graduated from Otterbein College in Westerville, Ohio, in 1955. In 1957, Jump graduated with a degree in journalism from Kansas State University, where he was a member of Kappa Sigma Fraternity and worked for KSDB, the Kansas State Student Radio Station. He began his career working at radio and television stations in Manhattan and Topeka, Kansas. In Topeka he did the weather on WIBW-TV in 1959; in the early 1960s, he performed on the station's weekday after-school children's program as "Wib the Clown," then had to change clothes quickly and wipe off the clown makeup in order to report the weather on the local evening news, which followed. He later returned to Dayton and worked as a producer and on-air personality in Gordon Jump's Fun Time, a popular show for younger children, at WLWD (now WDTN) before deciding to move to Los Angeles and study acting.

Acting career
Jump first began his acting career in the 1960s with minor roles in television on such shows as Get Smart, Lancer, Here Come the Brides, and Green Acres. He also guest-starred in a number of series during the 1970s including The Rockford Files, A Touch of Grace, Paul Sand in Friends and Lovers, The Incredible Hulk (in an October 1978 episode called "Ricky"), The Lost Saucer, Starsky & Hutch, Lou Grant, Kojak, The Bionic Woman, The Mary Tyler Moore Show, and The Hardy Boys/Nancy Drew Mysteries. He had a brief speaking role as a farmer in the 1976 television movie Sybil.

In the 1960s, Jump converted to The Church of Jesus Christ of Latter-day Saints (LDS Church). Subsequently, he acted in several church-sanctioned instructional and educational productions, including When Thou Art Converted (1967), Pioneers In Petticoats (1969) What About Thad? (1970), a marriage-advice film, and as the Apostle Peter in a 1969 film used as part of the LDS temple ceremonies. Jump would return to LDS films with a small role in the 2002 comedy The Singles Ward.

In 1978, he landed his signature role of Arthur "Big Guy" Carlson on the situation comedy WKRP in Cincinnati, portraying a bumbling radio station manager whose main qualification for the job is being the son of the station's owner.

After WKRP in Cincinnati folded in 1982, Jump made an appearance on a two-part episode of Diff'rent Strokes, cast as Mr. Horton, the owner of a bicycle shop who attempts to molest series protagonist Arnold Jackson and his friend, Dudley Ramsey. He later hosted the PBS series Make Yourself at Home, taught voice classes, and made frequent appearances on the hit television show Growing Pains playing Joanna Kerns's father. Jump also enjoyed working in theater.

In 1989, Jump took over the Maytag repairman role from Jesse White. In the 1990s, Jump starred in a short-lived revival of WKRP in Cincinnati entitled The New WKRP in Cincinnati. He also appeared in the ninth and final season of Seinfeld, in which he played George Costanza's boss at a playground equipment company over two episodes. Jump's last movie role was in the 2004 film Changing of the Guard, released after his death.

Death
Jump died on September 22, 2003 from pulmonary fibrosis, leading to respiratory failure at his home near Los Angeles, California.