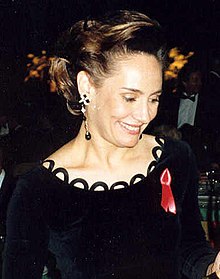 Metcalf began her career with the Steppenwolf Theater Company and frequently works in Chicago theater. For her stage performances and work on Broadway, Metcalf has received six Tony Award nominations, winning Best Actress in a Play in 2017 for her performance in A Doll's House, Part 2 and Best Featured Actress in a Play for the 2018 revival of Edward Albee's Three Tall Women.

She gained national attention for her performance as Jackie Harris in the ABC sitcom Roseanne (1988–1997, 2018) for which she won three Primetime Emmy Awards for Outstanding Supporting Actress in a Comedy Series (1992–1994). An eleven-time Emmy Award nominee, Metcalf's television credits include 3rd Rock from the Sun, The Norm Show, Frasier, Desperate Housewives, and The Big Bang Theory. She played a leading role in HBO comedy series Getting On (2013–2015), for which she received critical acclaim and a nomination for the Primetime Emmy Award for Outstanding Lead Actress in a Comedy Series.

Metcalf has starred in numerous films and most well known for her critical acclaimed performance in Greta Gerwig's comedy-drama film Lady Bird, for which she was nominated for an Academy Award, a Golden Globe Award, a SAG Award, and a BAFTA Award. Since 1995, she has voice Mrs. Davis, Andy's mom, in the Toy Story franchise.

Early life
Metcalf was born in Carbondale, Illinois, the eldest of three children. She, her brother James and her sister Linda were raised in Edwardsville, Illinois, which she has said "isn't anywhere near a theatre." Her father, James, was the budget director at Southern Illinois University-Edwardsville at the time of his sudden death in 1984. Her mother, Libby, was a librarian. Her great-aunt was the Pulitzer Prize-winning playwright Zoë Akins. She is an alumna of Illinois State University, class of 1976.

Metcalf, who worked as a secretary while in college, said she enjoyed seeing a pile of paper in the to-do box on one side of her desk move over to the completed side by the end of the day. She was often so focused on her work she missed lunch. She originally majored in German, thinking she could work as an interpreter, and then in anthropology before accepting that majoring in theatre was her true passion. She has said that theatre work also involves interpreting and studying human behavior. She has described herself as hideously shy, and yet she found the courage to audition for a few plays in high school and was "hooked". She initially did not choose acting as a career because it was unlikely to lead to regular work.

Career
Stage
Metcalf attended Illinois State University and earned her Bachelor of Arts in Theater in 1976. While at ISU, she met fellow theater students, among them John Malkovich, Glenne Headly, Joan Allen, Terry Kinney, and Jeff Perry, the latter two of whom, along with Perry's high school classmate Gary Sinise, went on to establish Chicago's famed Steppenwolf Theatre Company. Metcalf began her professional career at Steppenwolf, of which she was a charter member. Metcalf went to New York to appear in an Off-Broadway Steppenwolf production of Balm in Gilead at Circle Repertory in 1984 for which she received the 1984 Obie Award for Best Actress and a 1984–85 Theatre World Award (for best debut in a Broadway or Off-Broadway performance). Metcalf was praised for her performance as Darlene, and was specifically singled out for her twenty-minute act two monologue. Chicago critic Richard Christiansen said of her performance:

There's a moment when Laurie Metcalf—who plays this poor young thing that comes to the big city and hangs out at this greasy spoon diner where the play is set—is talking about her once boyfriend who is an albino; I think it's a monologue of about five, six, seven minutes. Just to sit there and watch and hear Laurie unspool that story, it just brought tears coming down your eyes—oh, boy, it was something. 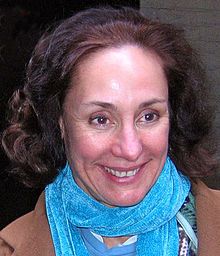 Metcalf relocated to New York City and began to work in both film and theater, including such productions as David Mamet's November on Broadway in 2008.

In June of 2009, Metcalf starred in Justin Tanner's play, Voice Lessons with French Stewart, in Hollywood before beginning rehearsals to play Kate Jerome in the Broadway revival of Neil Simon's semi-autobiographical plays Brighton Beach Memoirs and Broadway Bound, directed by David Cromer. The former production's run, however, lasted for 9 performances in October 2009, while the latter was canceled prior to opening.

Voice Lessons, however, with its original cast intact, went on to three more runs—one Off-Broadway in May 2010, another in Hollywood in May 2011, and another in Chicago in May 2016.

In September 2010, Metcalf returned to Steppenwolf and starred in Lisa D'Amour's play, Detroit.

In 2011, she appeared in Joe Mantello's Off-Broadway play The Other Place by Sharr White. She won the 2011 Lucille Lortel Award, Outstanding Lead Actress, and the 2011 Obie Award, for her performance.

In 2012, Metcalf joined David Suchet in a West End production of Eugene O'Neill's Long Day's Journey into Night, for which she was nominated for the Evening Standard Theatre Award for Best Actress.

In 2013, The Other Place transferred to Broadway with Metcalf reprising her role and earning Tony and Drama League nominations. She starred with her real-life daughter, Zoe Perry.

In 2013, Metcalf starred in Bruce Norris's Off-Broadway play Domesticated with Jeff Goldblum at the Mitzi Newhouse Theater of Lincoln Center. She was nominated for the 2014 Drama League Award, Distinguished Performance; and the 2014 Drama Desk Award, Outstanding Actress in a Play for her performance.

In 2015, she took the role of Annie Wilkes in the Broadway production of Stephen King's Misery, opposite Bruce Willis. The play premiered on November 15, 2015.[30] It received mixed reviews from critics, however Metcalf's performance was widely acclaimed. She was nominated for the Tony Award for Best Actress in a Play, her third Tony nomination overall.

In 2017, Metcalf returned to Broadway in Lucas Hnath's A Doll's House, Part 2 with Chris Cooper at the John Golden Theatre. which opened in April. She received critical acclaim for her performance and earned her first Tony Award winning for Best Actress in a Play.

In 2018, Metcalf returned to Broadway in the revival of Three Tall Women with Glenda Jackson, and Allison Pill at the John Golden Theatre. She won her second consecutive Tony Award, this time for Best Featured Actress in a Play.

In 2019, Metcalf plays Hillary Clinton opposite John Lithgow as Bill Clinton in Lucas Hnath's Hillary and Clinton at the John Golden Theatre. The play is directed by Joe Mantello and opened April 18, 2019, running through July 21, 2019. Metcalf was nominated for the 2019 Tony Award, Best Performance by an Actress in a Leading Role in a Play.

Metcalf has often appeared against type in both film and television; in JFK (1991), she played a dramatic role as one of Jim Garrison's chief investigators. She appeared as the murderous mother of Billy Loomis in the horror film Scream 2 (1997); and portrayed real-life Carolyn McCarthy in the television movie The Long Island Incident (1998).

Metcalf has appeared in several television series, including being a cast member for a single episode of Saturday Night Live—the final episode of the show's tumultuous 1980–1981 season. In 1981, she appeared as a feature player on the first Dick Ebersol-produced episode of Saturday Night Live following the firing of Jean Doumanian. She appeared in a Weekend Update segment about taking a bullet for the President of the United States. Because of the sketch show's severe decline in quality at the time and the 1981 Writers Guild of America strike, the show was put on hiatus for retooling. Metcalf was never asked back to be a cast member.

Metcalf is perhaps best known for her role as Jackie Harris, the multiple-careered, low self-esteemed, amiable sister of the title character, in the hit series Roseanne. Her performance garnered three consecutive Emmy Awards. Roseanne originally ran from 1988 to 1997. On April 28, 2017, it was announced that a revival of Roseanne was in the works and that Metcalf along with most of the original cast and some of the producers would return for the limited series that was being shopped around with ABC and Netflix the frontrunners to land the show. On May 16, 2017 it was confirmed that eight episodes would air mid-season in 2018 on ABC. On May 29, 2018, in the wake of racist remarks made by Barr on Twitter regarding Valerie Jarrett (an advisor of former president Barack Obama), ABC cancelled the revival after a single season. Metcalf appeared as Jackie over the show's entire run. Metcalf reprised her role in The Conners, a spinoff of Roseanne without Barr's involvement which premiered in fall 2018.

She subsequently appeared with Norm Macdonald on The Norm Show (or Norm), which ran for three seasons (1999–2001), and was also a regular character on the 2003 Nathan Lane series Charlie Lawrence, which was cancelled after the airing of two episodes. Metcalf has made guest appearances on Absolutely Fabulous, Malcolm in the Middle, My Boys, Dharma & Greg, Frasier, Without a Trace, 3rd Rock from the Sun, The Big Bang Theory, and Monk. She has been nominated for the Emmy Award as Outstanding Guest Actress In A Comedy Series for the latter three listed roles.

Metcalf took a recurring role on Desperate Housewives—for which she received a Primetime Emmy Award nomination for Best Guest Actress in a Comedy Series. and also appeared alongside her ex-husband Jeff Perry in an episode of Grey's Anatomy. In fall 2008, Metcalf starred in the CW dramedy Easy Money, as the matriarch of a family of loan sharks. The series was canceled after three episodes. Alongside this role, she was the lead actress in the short-lived CBS sitcom The McCarthys (2014–15).

From 2013-2015, Metcalf starred in HBO comedy series Getting On with Alex Borstein. Metcalf was nominated for the Primetime Emmy Award for Best Leading Actress in a Comedy Series for the final season.

In 2016, Metcalf took a role in the third episode of Louis C.K.'s self-funded show Horace and Pete. She was nominated for the Primetime Emmy Award for Guest Actress in a Drama for her performance.

In 2017, Metcalf received universal critical acclaim for her performance in Greta Gerwig's coming of age film Lady Bird starring alongside Saoirse Ronan and Tracy Letts. For her performance, she was nominated for numerous awards, including the Academy Award, Golden Globe, SAG, BAFTA, Critics Choice and the Independent Spirit Award.

In 2018, Metcalf's performance on the revival of Roseanne was nominated for the Primetime Emmy Award for Best Comedy Actress in a Supporting Role.

In December 2018 Metcalf was nominated for a Critics' Choice Award for the best supporting actress in a comedy series for The Conners competing against her own daughter Zoe Perry who was nominated in the same category for her role in Young Sheldon, neither won.

Personal life
In 1983, Metcalf married Jeff Perry, co-founding member of Steppenwolf Theatre Company. They had a daughter, Zoe Perry, in 1983. They divorced in 1986.

Metcalf later began a relationship with Matt Roth, the Roseanne co-star who played her abusive boyfriend, Fisher. By November 1993 they had a son, Will, and eventually married. They also worked together on occasion in the 1994 feature film thriller Blink and the 1998 drama Chicago Cab, they also appeared together in an episode of Desperate Housewives. Their daughter, Mae Akins, was born in 2005 via surrogate. They had a second son, Donovan, whom they fostered at six years old in 2006 and permanently adopted. On November 26, 2008, Metcalf and Roth separated. In September 2011, Roth filed for divorce, citing irreconcilable differences. In May 2014, the divorce was finalized.

Metcalf has self-disclosed as a workaholic and that she is hard on herself during rehearsals. She has often said that she prefers theatre over other acting mediums as it is where she feels most comfortable.

She has also appeared in commercials for Plan USA, a humanitarian organization which helps children in need around the world.