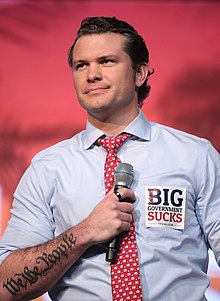 Peter Brian Hegseth (born June 6, 1980) is an American Fox News Channel contributor. He served in the U.S. military with deployments to Cuba and Iraq.

He is a former reserve military officer and former executive director of the political advocacy groups Vets For Freedom and Concerned Veterans for America. The latter is a conservative advocacy group funded by the billionaire Koch brothers, which advocates for greater privatization of the Department of Veterans Affairs (VA). He was in consideration to head the United States Department of Veteran Affairs in the Trump administration, but major veterans' groups objected, and in January 2017, David Shulkin was selected instead.

Education
Hegseth attended Forest Lake Area High School in Forest Lake, Minnesota, and received his Bachelor of Arts at Princeton University in 2003. In 2013, he received a Master in Public Policy from the John F. Kennedy School of Government at Harvard University.

At Princeton, Hegseth was the editor of the Princeton Tory, a conservative student-run publication.

Military career
Following graduation from Princeton in 2003, Hegseth joined Bear Stearns as an equity capital markets analyst and was also commissioned as a reserve infantry officer into the U.S. Army National Guard. In 2004 his unit was called to Guantánamo Bay, where he served as an infantry platoon leader. He was awarded the Army Commendation Medal. Shortly after returning from Cuba, Hegseth volunteered to serve in Baghdad and Samarra, where he held the position of infantry platoon leader and, later in Samarra, as civil–military operations officer. During his time in Iraq, he was awarded the Bronze Star Medal, Combat Infantryman Badge, and a second Army Commendation Medal.

Conservative activism
Upon return from Iraq, Hegseth worked briefly at the Manhattan Institute for Policy Research. According to his LinkedIn page, Hegseth left the conservative think tank in 2007 to work at Vets For Freedom as executive director. He worked at Vets for Freedom until 2012. Vets for Freedom advocated for a greater troop presence in Iraq and Afghanistan. Hegseth formed the political action committee MN PAC in 2012.

Hegseth was the executive director for Concerned Veterans for America, an advocacy group funded by the billionaire Koch brothers. The group advocated for greater privatization of the Department of Veterans Affairs (VA). According to his LinkedIn page, he left the group in 2015.

Spending controversy
While Hegseth was the chief executive of Concerned Veterans for America, he hired his brother Philip to work for the non-profit and paid him $108,000 according to tax records from 2016 and 2017.

Punditry
During the 2016 Republican primaries, he initially backed Marco Rubio, then Ted Cruz and ultimately Donald Trump. Hegseth has since then emerged as a strong Trump supporter.[8] As a Fox News personality, he has frequently attacked the media, Democrats and Special Counsel Robert Mueller's investigation into Russian interference in the 2016 election.

Fox News
Hegseth has appeared on Fox News Channel, as well as on CNN and MSNBC. Hegseth joined Fox News as a contributor in 2014.

On June 14, 2015, Hegseth threw an axe which struck and injured a member of the West Point Hellcats. During a live broadcast on Fox & Friends promoting an upcoming segment about the Stihl Timbersports Series, the co-host threw a double-bit lumberjack axe that overshot the wooden target and hit drummer SFC Jeff Prosperie across his right elbow. The axe head hit broadside on the arm such that Prosperie narrowly missed significant injury, but he did sustain minor cuts across the wrist as the axe tumbled after the initial impact. Coordination of the event and broadcast between the West Point Band and Fox had assured that there would be no axe throwing while the service members were performing behind the target.

In September 2017, Hegseth interviewed President Donald Trump. Hegseth received criticism for allowing Trump to make false claims without challenging him. For instance, Trump falsely asserted on at least six instances in the interview that the attempt to repeal the Patient Protection and Affordable Care Act failed because of a "hospitalized senator", yet Hegseth never pressed him on it. According to an opinion column in the Washington Post, Hegseth's "interview was notable for one reason: A viewer who got most of his news from Fox heard only scant details about the contents of Cassidy-Graham. As with the previous attempts to partially repeal the ACA, the bill was covered less for its substance than as a question of whether Republicans could deliver a "win" on a key issue." Philip Bump of the Washington Post provided a list of all notable claims that Trump made during the interview that, in his opinion, warranted follow-up questions which Hegseth never asked. Hegseth has been speculatively mentioned as a hypothetical replacement for VA Secretary David Shulkin.

In May 2019, it was reported that Trump was considering pardoning several U.S. military service members who had been charged with war crimes, including a veteran set to stand trial for shooting indiscriminately at civilians, hitting a girl and an elderly man, as well as fatally stabbing a captured teenage Islamic State while he was receiving medical treatment. The Daily Beast and CNN later reported that Hegseth had for months sought to convince Trump to pardon these individuals. At the same time, Hegseth was discussing these cases on Fox News without disclosing that he had advised Trump to pardon them.

Personal life
Hegseth was divorced from his first wife, Meredith Schwarz, in 2009. He married his second wife, Samantha Deering, in 2010; they have three children. Hegseth had a daughter with Fox Executive Producer Jennifer Rauchet in August 2017. He and Samantha divorced later in 2017.