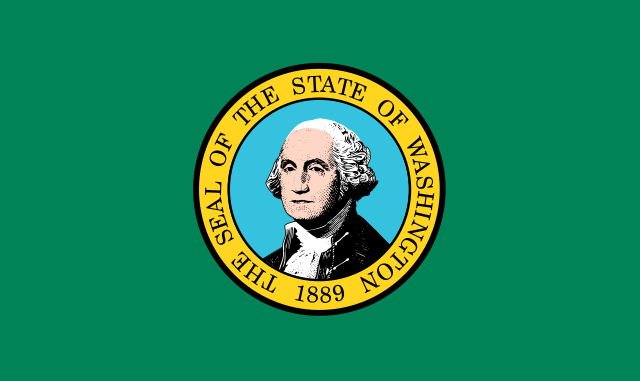 Use: Civil and state flag
Proportion: 1:1.6 (5:8)
Adopted: March 5, 1923 (standardized in 1967)
Design: The state seal sized at 1/3 the length of the flag centered on a field of dark green.
The state flag of Washington consists of the state seal, displaying an image of state namesake George Washington, on a field of dark green with gold fringe being optional. It is the only U.S. state flag with a field of green as well as the only state flag with the image of an American president. The Secretary of State regulates flag protocol related to the state flag, as well approving replica flags for commercial sale and other standards related to the flag.

The flag was officially adopted on March 5, 1923, and has been a symbol of Washington ever since. Washington had achieved statehood in 1889, but did not have an official flag at the time. The Washington chapter of the Daughters of the American Revolution designed the flag in 1915 and campaigned for its adoption by the Washington State Legislature in the early 1920s. The state flag has undergone minor revisions since its adoption, including the use of standardized colors in 1955 and a modernized seal in 1967.