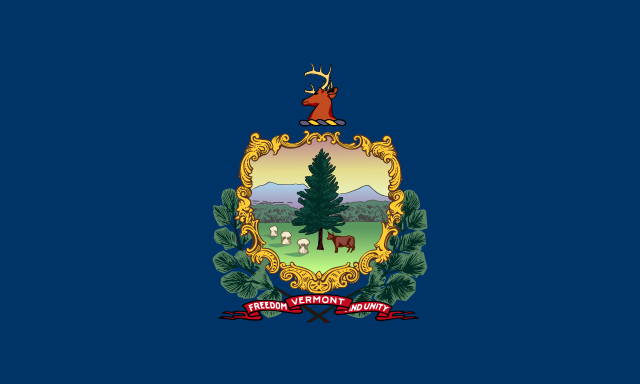 Use: Civil and state flag
Proportion: 3:5
Adopted: June 1, 1923; 95 years ago
Design: The Vermont state coat of arms on a field of azure.
The flag of Vermont consists of the state's coat of arms and motto. The Vermont General Assembly adopted the current flag on June 1, 1923.

Multiple versions of the flag have been included throughout history. Originally, the flag was the same as the flag of the Green Mountain Boys. It was then changed to look similar to the flag of the United States, consisting of red and white stripes, and a blue canton. It was changed to be dissimilar to avoid confusion. Proposals have been brought up to revert the flag back to the Green Mountain Boys' flag, but none have succeeded.

Symbolism
The flag consists of the state's coat of arms and motto on a field of azure. While the pine needle supporters of the coat of arms are represented throughout New England and symbolizes the small pine branches worn at the battle of Plattsburgh near the end of the War of 1812, the pine tree in the middle of the coat of arms represents the Vermont forests. The cow and three sheaves of wheat represent the dairy and agriculture industries. The deer head on top represents Vermont's wildlife. The Green Mountains are in the background as well. The motto, "Freedom and Unity", is also used. The motto balances two different ideals, the freedom of the individual citizen, and the welfare of the common good.