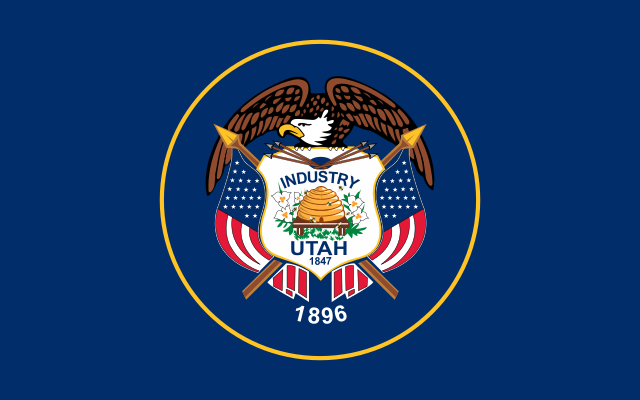 Use: Civil and state flag
Proportion: 5:8
Adopted: February 16, 2011
Design: The Utahn coat of arms encircled in a golden circle with the number "1896" written in white text with Arabic numerals, on a field of dark navy blue.
The flag of the State of Utah was adopted in February 2011 and consists of the seal of Utah encircled in a golden circle on a background of dark navy blue. It replaced a previous, albeit rather similar flag that had been in use since 1913.
Symbolism
A bald eagle, the national bird of the United States, symbolizes protection in peace and war. The sego lily, the state flower of Utah, represents peace. The state motto "Industry" and the beehive represent progress and hard work. The U.S. flags show Utah's support and commitment to the United States. The state name "Utah" appears below the beehive. The date 1847 represents the year the Mormon pioneers entered the Salt Lake Valley, while 1896 represents the year that Utah was admitted as the 45th state to the Union.

Alternatively, the sego lily, a flowering plant that survives in the arid Great Basin climate, provided food to the early pioneer colony, helping the settlers survive the harsh winters after their arrival in the Salt Lake Valley. Thus it became the state flower. The eagle and flanking flags are also important symbols; Utah's is one of the few state flags to carry the American flag as part of the design. This is because the Mormon settlers were thought not to be loyal to the United States, which was one of the reasons statehood was not granted to Utah until nearly 40 years after the original settlements.