Information Portal » Flags of the World » Flag of Costa Rica 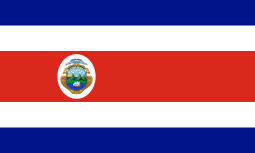 The flag of Thailand is similar to the Costa Rican flag, except there is no emblem, and the blue and red stripes are reversed. It is also similar to the historic flag of allied-occupied Germany, and North Korea, but the latter has thinner white stripes.

Early History
During most of its colonial period, Costa Rica was the southernmost province of the Captaincy General of Guatemala, which was nominally part of the Viceroyalty of New Spain (i.e., Mexico), but which in practice operated as a largely autonomous entity within the Spanish Empire. As such, the land of present Costa Rica was covered by the various flags of the Spanish Empire until 1823.

Actual Flag
The blue, white and red horizontal design was created in 1848 by Pacífica Fernández, wife of then president José María Castro Madriz. Fernández was inspired by France's 1848 Revolution, and the creation of the French Second Republic. The new design to the Costa Rican flag adopted the colors of the French tricolor.

The coat of arms of Costa Rica was also revised in 1848 and placed in the center of the flag. In 1906, when the coat of arms was modified, the update was placed in a white disk on the flag's red stripe, and later on an oval, set toward the hoist.

The coat of arms depicts the isthmus between the Pacific Ocean and the Caribbean Sea, with 3 volcanoes. The 7 stars stand for the 7 provinces of Costa Rica. The Spanish name of the country is scrolled on a white banner, Republica de Costa Rica (Republic of Costa Rica), and the Central American union is recognized in the blue upper scroll, America Central, recalling the former United Provinces of Central America.