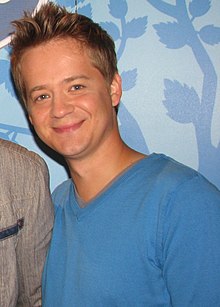 Jason Daniel Earles (born April 26, 1977) is an American actor, comedian, and martial artist, known for his role as Jackson Stewart in the Disney Channel sitcom Hannah Montana and his role as Rudy Gillespie in the Disney XD series Kickin' It.

Early life
Earles was born in San Diego, California. After living in Ohio and Washington state, his family moved to Oregon. In Oregon, he graduated from Glencoe High School in Hillsboro. Before moving to southern California, Earles lived in Billings, Montana, where he graduated from Rocky Mountain College in 2000.

Career
Earles played a nerdy card gamer who was friends with the character Brian Miller in the CBS sitcom Still Standing. In 2004, he appeared in the film National Treasure as Thomas Gates, ancestor of Ben Gates (Nicolas Cage). In 2005, Earles played Ernie Kaplowitz in the film American Pie Presents: Band Camp.

Earles' most notable role was as Jackson Stewart, the older brother of Miley Stewart (Miley Cyrus), in the Disney Channel series Hannah Montana from 2006 to 2011.[8] Earles was notably older than the character he played; when the show began, he was a 29-year-old playing a 16-year-old.

He voiced Spudnik in the 2009 talking dog film Space Buddies. Earles stars as Rudy Gillespie in the Disney XD original series Kickin' It, which premiered on June 13, 2011.

Personal life and philanthropy
Earles has contributed cast memorabilia to the fundraisers for Rocky Mountain College, his alma mater.