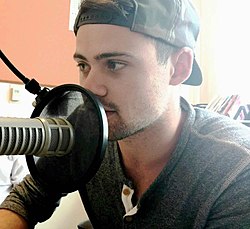 James Orien Allsup (born September 7, 1995) is an American far-right political commentator, podcaster and YouTube personality. Allsup has been described as a white supremacist and a white nationalist; he has stated that he prefers the term "American nationalist." He is a member of the white nationalist and neo-Nazi group Identity Evropa.

In 2015, Allsup was elected president of Washington State University's chapter of the College Republicans. In August 2017, Allsup attended the Unite the Right rally in Charlottesville, Virginia, mainly to record events for his YouTube channel. After the rally turned violent, he resigned as president of the College Republicans at WSU in 2017, before being re-elected later in November of the same year. He was unable to take the position per university rules as he was set to graduate.

In June 2018, he was elected to the minor position of a precinct committee officer for the Whitman County, Washington Republican Party. On January 7, 2019, the Whitman County Republican Central Committee voted unanimously to eject Allsup from the party. Although he will officially keep the title of precinct committee officer, all of his power in that position has been stripped, including his voting right.

Early life and education
Allsup was born in Beaverton, Oregon on September 7, 1995. He graduated from Bothell High School in 2014, and then enrolled at Washington State University in Pullman, Washington, graduating in 2017. While attending WSU, he was president of WSU College Republicans and hosted events that brought Republican candidates such as Bill Bryant and Chris Vance to the university.

In January 2017 Allsup arranged for Milo Yiannopoulos to speak at WSU, though the event ended up being canceled due to weather. The President of the WSU Young Democrats, Gavin Pielow, continued to host a "Civics 101" program that was planned as an "alternative event" to Yianopolous' planned visit.

As President of the College Republicans, Allsup consistently participated in public forum debates with his counterpart Pielow. In the spring of 2017, ASWSU Senator Kevin Schilling moderated a debate between Allsup and Pielow in which the two discussed Russia's involvement in President Donald Trump's Administration, Supreme Court confirmations, U.S. foreign policy, the proposed border wall between the U.S. and Mexico, the national budget, and health care.

In 2016, Allsup served as the Washington coordinator for Students for Rand, the youth division of Rand Paul's presidential campaign.

Allsup helped to organize the May 9, 2016 construction of the "Trump Wall" at the University of Washington. The wall was 10 by 8 ft (3.0 by 2.4 m) and built out of plywood, painted to resemble a brick wall, with the phrases "Blue Lives Matter" and "Make America Great Again" painted on the front. The event, which was co-hosted by UW Students for Trump and UW College Republicans, was met with "about 100" protesters. Allsup stated that the intended message of the event was "that we need to have a strong immigration policy and enforce the law," and regarding the exposure the event generated, that "the reason people demonstrate is for exposure, media or otherwise."

In January 2017, he attended an inauguration celebration outside the National Press Club in downtown Washington, D.C., where he stated he had been attacked by a protester with a flagpole.

Unite the Right rally and aftermath
Allsup attended the Unite the Right rally in Charlottsville on August 12, 2017. At the rally, he documented events and delivered a speech defending the protesters there. Allsup was open about his participation in the rally, including his plan to speak, which was disrupted by protesters. On the Monday after the rally, he resigned from his position as head of the College Republicans group at WSU, a move he said he had been planned in advance but had subsequently expedited. In an interview with KREM, he said that he attended the rally "in a media capacity" and was unexpectedly asked to speak by one of its organizers. He also said that he disagreed with the violence that occurred there and with the hateful symbols, such as swastikas, that were being displayed by some of the rally's attendees. After attending the rally in Charlottesville, it was reported by unnamed sources that he uploaded a video documenting his experiences there, which was almost immediately taken down.

Images of Allsup attending the rally posted on social media led to demands on social media platforms that WSU expel Allsup, including a petition. Allsup stated on Twitter that if college administrators did expel him, it would result in a "huge civil rights lawsuit win for me." As of the week of August 14, he was not enrolled in classes for the fall semester at WSU.

Allsup's account on Twitter was suspended on Christmas Day 2017. At the time he had amassed about 24,000 followers.

Election to local Republican Party position
In an uncontested election in June 2018, Allsup was elected to be the Precinct Committee Officer (PCO) for Precinct #129, a minor "hyperlocal" position of the Washington State Republican Party. PCOs elect the Republican leadership in their respective counties. Allsup was unopposed for the position and the party rules state that an unopposed candidate automatically wins. His election was criticized by many Republican leaders in Whitman County.

According to the Southern Poverty Law Center, which monitors hate groups, Allsup's intentions have been to achieve his white nationalist anti-immigration agenda "through the infiltration of the Republican Party rather than by the radical, revolutionary action favored by vanguardist groups on the extreme fringe." Allsup told a white nationalist podcast in 2017 "You have a seat at the table, and that’s the most important thing, getting that seat at the table, and you can get that seat at the table by, yes, showing up, yes, by bringing people in." Keegan Hankes, a senior research analyst at the SPLC, commented that "Anytime that someone who holds extreme political positions has any foothold in mainstream politics, it’s a problem," and pointed out that using uncontested elections to get a foot in the door has long been a strategy for white nationalists.

On January 7, 2019, the Whitman County Republican Party Central Committee voted unanimously to eject Allsup from the party ranks. As his election for PCO was publicly held and the party is a private organization, they are unable to officially strip him of his title. He will remain a PCO but all of his powers have been taken away, including his right to vote within the party. Several party officials, including County Commissioners Art Swannack and Michael Largent, commented that Allsup was hardly a Republican. They pointed to the fact that Allsup himself has denied being a Republican.

Views
Allsup has described himself as a "paleoconservative" and a "right-wing libertarian". He has been described as a white nationalist by The Atlantic, a white supremacist by Buzzfeed, and a "budding alt-right figure" by The Washington Post. He is a former Liberty Conservative writer. He argues that he is not a white nationalist. Shortly after stepping down as president of the WSU College Republicans, he told KCPQ that "I have fully condemned the KKK, I have fully condemned Nazis, all of that kind of stuff."

In May 2017, he expressed support for the views of psychologist Richard Lynn, a professor at the University of Ulster known for his belief in racial differences in intelligence.