Information Portal » Flags of the World » Flag of Cameroon 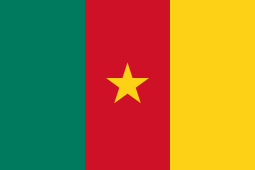 The national flag of Cameroon was adopted in its present form on 20 May 1975 after Cameroon became a unitary state. It is a vertical tricolor of green, red and yellow, with a five-pointed star in its center. There is a wide variation in the size of the central star, although it is always contained within the inside stripe.

Description
The color scheme uses the traditional Pan-African colors (Cameroon was the second state to adopt them). The center stripe is thought to stand for unity: red is the colour of unity, and the star is referred to as "the star of unity". The yellow stands for the sun, and also the savannas in the northern part of the country, while the green is for the forests in the southern part of Cameroon.

The previous flag of Cameroon, used from 1961 to 1975, had a similar color scheme, but with two gold (darker than the third stripe by comparison) stars in the upper half of the green. It was adopted after British Southern Cameroons joined the state of Cameroon.

Similar Colours
The flag of Cameroon uses the Pan-African colours that is used my many African countries in the region, most notable with similar designs in the flags of Senegal, Guinea and Mali.

Flag History of Cameroon? | How old is Cameroon Flag Design formation? | How to call Cameroon?