Information Portal » Flags of the World » Flag of Burkina Faso 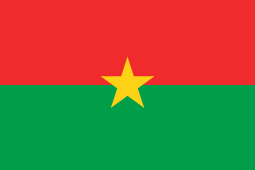 The national flag of Burkina Faso is formed by two equal horizontal bands of red (top) and green, with a yellow five-pointed star resting in the center. In Blazon: Per fess gules and vert, a mullet of five points Or. The flag was adopted on 4 August 1984. The flag is coloured in the popular Pan-African colours of the Ethiopian flag, reflecting both a break with the country’s colonial past and its unity with other African ex-colonies. The red is also said to symbolize the revolution and the green the abundance of agricultural and natural riches. The yellow star placed over the red and green stripes is the guiding light of the revolution. The flag was adopted following the coup of 1983 which brought Thomas Sankara to power.

National coat of arms
The current coat of arms of Burkina Faso features a shield with the national flag colors, with a scroll bearing the name "BURKINA FASO" accompanied by two stallions on each side, with an open book at the bottom. A lower banner bears the national motto in French: "Unité – Progrès – Justice" (unity, progress, justice).

Prior national flags and coat of arms
The original flag of Upper Volta, adopted at independence, contained three horizontal stripes of black, white, and red. These colours represented the three major tributaries of the Volta River, which flows south through the country: the Black Volta, the White Volta and the Red Volta. It is similar to the tricolor flag used by the German Empire from 1871 to 1918. The flag was changed when Upper Volta became Burkina Faso on 4 August 1984.

From 1984 until 1997, the official Burkina Faso coat of arms used a revolutionary central crest featuring a mattock crossed with a Soviet AK-47 assault rifle, along with an open book symbolising the importance of education and the study of revolutionary principles. A lower banner declared in French, "Motherland or Death, We Shall Overcome".