Information Portal » Flags of the World » Flag of Bulgaria 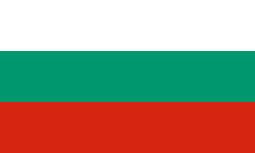 The flag of Bulgaria (Bulgarian: знаме на България, [znamɛ nɐ bɐɫˈɡarijɐ], zname na Bǎlgariya) is a tricolour consisting of three equal-sized horizontal bands of (from top to bottom) white, green, and red. The flag was first adopted after the 1877–1878 Russo-Turkish War, when Bulgaria gained independence. The national flag at times was charged with the state emblem, especially during the communist era. The current flag was re-established with the 1991 Constitution of Bulgaria and was confirmed in a 1998 law.

History
After the liberation of Bulgaria following the Russo-Turkish War in 1878, the flag was described in the Tarnovo Constitution of 1879 as follows:

“Art. 23. The Bulgarian people's flag is three-coloured and consists of white, green and red colours, placed horizontally.”
From 1946 until 1990 the emblem of the People's Republic of Bulgaria was placed on the left side of the white stripe. It contained a lion within a wreath of wheat ears below a red star and above a ribbon bearing the date 9 September 1944, the day of Bulgarian coup d'état of 1944 which led to the establishment of the People's Republic of Bulgaria. In 1971, it was changed so the ribbon bearing the years 681, the year of the establishment of the First Bulgarian Empire by Asparukh and 1944.

Following the fall of communism in 1990, the then-enforced Zhivkov Constitution was amended so the flag can be reverted to the pre-communism era. The new Constitution of Bulgaria, adopted in 1991, describes the Bulgarian flag as follows:

“Art. 166. The flag of the Republic of Bulgaria shall be a tricolour: white, green and red from top, placed horizontally.”
A popular version of the flag, which has no official status, is also commonly known. It has the full coat of arms on the left of the flag, placed across the white and green fields only.

Flag law
According to the Law for the State Seal and National Flag of the Republic of Bulgaria, promulgated on 24 April 1998:

The national flag is of a rectangular shape. The fields of the individual colours shall be equal in size and shall be situated along the horizontal of the rectangular.

Flag History of Bulgaria? | How old is Bulgaria Flag Design formation? | How to call Bulgaria?