Information Portal » Flags of the World » Flag of Brazil 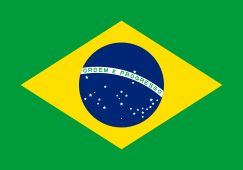 The flag of Brazil known in Portuguese as A Auriverde (The Yellow-and-green One), is a blue disc depicting a starry sky (which includes the Southern Cross) spanned by a curved band inscribed with the national motto "Ordem e Progresso" ("Order and Progress"), within a yellow rhombus, on a green field. Brazil officially adopted this design for its national flag on November 19, 1889 — four days after the Proclamation of the Republic, to replace the flag of the Empire of Brazil. The concept was the work of Raimundo Teixeira Mendes, with the collaboration of Miguel Lemos, Manuel Pereira Reis and Décio Villares.

The green field and the yellow rhombus from the previous imperial flag, though slightly modified in hue and shape, were preserved — the green represented the House of Braganza of Pedro I, the first Emperor of Brazil, while the yellow represented the House of Habsburg of his wife, Empress Maria Leopoldina.[1] A blue circle with white five-pointed stars replaced the arms of the Empire of Brazil — its position in the flag reflects the sky over the city of Rio de Janeiro on November 15, 1889. The motto Ordem e Progresso is inspired by Auguste Comte's motto of positivism: "L'amour pour principe et l'ordre pour base; le progrès pour but" ("Love as a principle and order as the basis; progress as the goal").

Each star corresponds to a Brazilian Federative Unit and, according to Brazilian Law, the flag must be updated in case of creation or extinction of a state. At the time the flag was first adopted in 1889, it held 21 stars. Then it received one more star in 1960 (representing the city-state of Guanabara), then another in 1968 (representing Acre), and finally four more stars in 1992 (representing Amapá, Roraima, Rondônia and Tocantins), totalling 27 stars in its current version.

The first Brazilian vexillological symbols were private maritime flags used by Portuguese merchant ships that sailed to Brazil. A flag with green and white stripes was used until 1692. The green and white colors represented the House of Braganza and the national colours of Portugal. In 1692, that flag was no longer used by ships that sailed to Brazil and became the flag of the merchant vessels in coastal Portugal. In 1692, a new flag was introduced for merchant vessels sailing to Brazil. The new flag had a white field with a golden armillary sphere. The armillary sphere had served as the personal emblem of King Manuel I of Portugal (reigned 1494-1521). During his reign Portuguese ships used it widely, and eventually it became a national emblem of Portugal and, more specifically, of the Portuguese empire. A similar flag was introduced[by whom?] for the Portuguese ships that sailed to India, but with a red armillary sphere. Despite representing the entire Portuguese empire, the armillary sphere began to be used more extensively in Brazil — the largest and most developed colony at the time — not only in maritime flags, but also on coins and other media. It eventually became the unofficial ensign of Brazil.

Empire of Brazil (1822–1889)
The imperial flag of Brazil was designed by Jean-Baptiste Debret as the Royal Standard of the Prince Royal of the United Kingdom of Portugal, Brazil and the Algarves, Pedro I.

After the Brazilian Declaration of Independence, and with the coronation of Pedro I as Emperor of Brazil, the Royal Standard was modified to become the flag of the Empire of Brazil. The new flag featured the imperial coat of arms within a yellow rhombus, on a green field.[5] The green and yellow colors represented the dynastic houses of Pedro I and his consort Maria Leopoldina of Austria.

The imperial flag was slightly modified during the reign of Pedro II, when an extra star was added to the imperial arms to conform to the new territorial organization of the country.

Republic of Brazil (1889–present)
Provisional flag of the Republic of the United States of Brazil (15 November – 19 November 1889)
Upon the proclamation of the Republic, one of the civilian leaders of the movement, the lawyer Ruy Barbosa, proposed a design for the nation's new flag strongly inspired by the flag of the United States. It was flown from 15 November 1889, until 19 November 1889, when Marshal Deodoro da Fonseca (acting as provisional president of Brazil) vetoed the design, citing concerns that it looked too similar to the flag of another state.

Fonseca suggested that the flag of the new republic should resemble the old imperial flag. This was intended to underscore continuity of national unity during the transition from a constitutional monarchy to a republic. Raimundo Teixeira Mendes presented a project in which the imperial coat of arms was replaced by a blue celestial globe and the positivist motto. It was presented to Fonseca, who promptly accepted. The flag was designed by a group formed by Raimundo Teixeira Mendes, Miguel Lemos, Manuel Pereira Reis and Décio Villares. It was officially adopted on 19 November 1889.

The flag has been modified on three occasions to add additional stars intended to reflect newly created states: 1960 (22 stars), 1968 (23 stars) and 1992 (27 stars). In contrast to many other national flags with elements representing political subdivisions, modifications to the flag of Brazil were not always made promptly upon political reorganisation, resulting in multi-year periods of history where there was a mismatch between the number of stars and the number of states and federal districts. The most recent modification was made on 11 May 1992, with the addition of four stars to the celestial globe (representing states created between 1982 and 1991), and a slight change in the stars' positions was made to match the astronomical coordinates correctly.

Design
The decree no. 4, issued on 19 November 1889, legally replaced the flag used under the constitutional monarchy with the new national flag. On 11 May 1992, the law no. 8,421, altered the celestial globe with the addition of six stars.

Construction
The precise positions of the 27 stars on the globe make the Brazilian flag one of the most complicated national flags to construct. The official design is defined by law no. 5,700, issued on 1 September 1971. The flag's length is twenty modules and the width, fourteen, translating into an aspect ratio of 10:7. The distance of the vertices of the yellow rhombus to the outer frame is a module and seven-tenths (1.7m). The blue circle in the middle of the yellow rhombus has a radius of three and a half modules (3.5m). The center of the arcs of the white band is two modules (2m) to the left of the meeting point of the extended vertical diameter of the circle with the base of the outer frame. The radius of the lower arc of the white band is eight modules (8m) and the radius of the upper arc of the white band is eight and a half modules (8.5m). The width of the white band is a half of a module (0.5m). 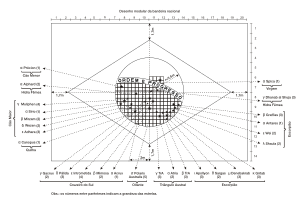 Stars
Paulo Araújo Duarte of the Federal University of Santa Catarina claims that "the creators of our republican flag intended to represent the stars in the sky at Rio de Janeiro at 8:30 in the morning on 15 November 1889, the moment at which the constellation of the Southern Cross was on the meridian of Rio de Janeiro and the longer arm [of the cross] was vertical".[12] Another article, citing "O Céu da Bandeira (The Sky of the Flag)", by J. R. V. Costa, says the exact time was actually 08:37. This last article includes the flag's designer's explanation of his intentions regarding the stars. According to Brazil's national act number 5,700 of 1 September 1971, the flag portrays the stars as they would be seen by an imaginary observer an infinite distance above Rio de Janeiro standing outside the firmament in which the stars are meant to be placed (i.e. as found on a celestial globe). Thus Beta Crucis appears to the right of the constellation and Delta Crucis to the left, in mirror image of the way they actually appear in the sky (and, coincidentally, the way they appear on the Brazilian coat of arms).

The star Spica is the only one above of the white band; it symbolises part of Brazilian territory in the northern hemisphere (and the State of Pará).

The Sigma Octantis (south pole star) is small, but all the other stars turn around it. Its unique position in the sky of south hemisphere represents the stability of the Federal District in the Brazilian union.

The shining star in constellation represent the size of territory of the state in the Brazilian region (constellation).

Flag History of Brazil? | How old is Brazil Flag Design formation? | How to call Brazil?