Information Portal » Flags of the World » Flag of Bolivia 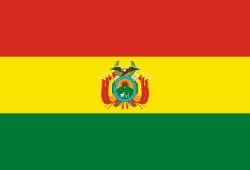 The national flag of Bolivia was originally adopted in 1851. The state flag and ensign (and war flag) is a horizontal tricolor of red, yellow and green with the Bolivian coat of arms in the center. According to one source, the red stands for Bolivia's brave soldiers, while the green symbolizes fertility and yellow the nation's mineral deposits.

Since 2009 the Wiphala also holds the status of dual flag in the country.

Overview
According to the revised Constitution of Bolivia of 2009, the Wiphala is considered a national symbol of Bolivia (along with the flag, national anthem, coat of arms, the cockade; kantuta flower and patujú flower).

Despite its landlocked status, Bolivia has a naval ensign used by navy vessels on rivers and lakes. It consists of a blue field with the state flag in the canton bordered by nine small yellow five-pointed stars, with a larger yellow five-pointed star in the fly. The nine small stars represent the nine departments of Bolivia, and the larger star the nation's right to access the sea (access that it lost in 1884 in the War of the Pacific).

Description
Design and dimensions
The national flag of Bolivia is described as a tricolor rectangle, with the colors red, yellow and green, in a ratio of 1:1:1, meaning three horizontal bands, with the red on the superior part occupying a third of the flag's width, yellow in the middle band using the same width, and green in the inferior part, using the last third.

The dimensions of the flag had not been defined since its adoption in 1851. Supreme Decree No. 27630 of 2004 finally established that the size of the national flag be of 7.5 squares width by 11 squares long, a square can be any size, but always using the ratio 15:22.

Color and symbolism
The first description of Bolivia's national flag, together with the significance of these, were first established by the Supreme Decree of 1888 during the government of President Gregorio Pacheco, which specifies that:

Red: "represents the blood shed by our heroes for the birth and preservation of the Republic"
Yellow: "represents our wealth and resources."
Green: "represents the richness of our natural areas as well as hope, a foundational value of our society"
The exact colors of the Bolivian flag have been established by the Supreme Decree of 2004:

The colours of the tricolor can also be found in the Bolivian Wiphala. The Wiphala has been included into the national colours of the Bolivian Air Force such as on the executive Dassault Falcon 900EX. The Wiphala is also officially flown on governmental buildings such as the Palacio Quemado and parliament alongside the tricolor since the introduction of the revised 2009 constitution.

Flag History of Bolivia? | How old is Bolivia Flag Design formation? | How to call Bolivia?