Information Portal » Flags of the World » Flag of Belize 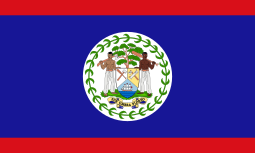 The flag of Belize was adopted on 21 September 1981, the day Belize became independent. It consists of the Coat of Arms on a blue field with red stripes at the top and bottom.

British Honduras obtained a coat of arms on 28 January 1907, which formed the basis of the badge used on British ensigns. The coat of arms recalls the logging industry that first led to British settlement there. The figures, tools, and mahogany tree represent this industry. The national motto, Sub Umbra Floreo, meaning "Under the Shade I Flourish", is written in the lower part of the coat of arms.

Description
The flag is royal blue, with a white disc at the centre containing the national coat of arms held by a mestizo and a man of African descent. The flag of Belize is the only country to have humans depicted as a major design element on its national flag, although the flag of Malta contains an image of Saint George on the badge of the George Cross, and the flags of British overseas territories Montserrat and the Virgin Islands, and that of French Polynesia also depict humans. The flag is bordered at top and bottom by two red stripes.

The colours on the flag are respectively those of the country's national parties, the People's United Party (PUP) and United Democratic Party (Belize) (UDP). The UDP, established in 1973, had objected to the original blue and white design, those two colours being the PUP's representative colours.

The two red stripes at the top and bottom were added to the original design at independence. The coat of arms was granted in 1907. Red stripes were added to denote the colour of the opposition party. The 50 leaves recall 1950, the year PUP came to power.

History
From 1950 onward, an unofficial national flag was in use. It was blue, with the coat of arms on a white disc in the centre (sometimes a blank white circle was used as the coat of arms was difficult to draw).

In 1981, Belize gained its independence and a competition was held to design a national flag for the country. The winning submission consisted of the unofficial national flag used by the People's United Party with a red border added to all four sides. This was changed to a red border on just the top and bottom before the design was officially adopted.

Flag History of Belize? | How old is Belize Flag Design formation? | How to call Belize?