Information Portal » Flags of the World » Flag of Bangladesh 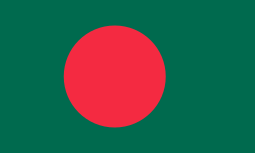 The national flag of Bangladesh (Bengali: বাংলাদেশের জাতীয় পতাকা pronounced [baŋladeʃer dʒatie̯o pɔtaka]) was adopted officially on 17 January 1972. It consists of a red disc on top of a green field, offset slightly toward the hoist so that it appears centred when the flag is flying. The red disc represents the sun rising over Bengal, and also the blood of those who died for the independence of Bangladesh. The green field stands for the lushness of the land of Bangladesh. The flag is similar to the Japanese flag, with the difference being the Japanese flag depicting the red disc centered on a white field.

The flag is based on a similar flag used during the Bangladesh Liberation War of 1971, which had a yellow map of the country inside the red disc. In 1972 this map was removed from the flag. One reason given was the difficulty for rendering the map correctly on both sides of the flag. The civil ensign and naval ensign place it in the canton of a red or white field, respectively.
Origin
The first version of the flag was designed and made by a section of student leaders and activists of Swadheen Bangla Nucleus on 6 June 1970, at room 108 of Iqbal Hall (now Sergeant Zahurul Haq hall), Dhaka University; students involved with the design were namely Kazi Aref Ahmed, ASM Abdur Rab, Shahjahan Siraj, Manirul Islam (Marshal Moni), Swapan Kumar Choudhury, Quamrul Alam Khan (Khasru), Hasanul Haq Inu, Yousuf Salahuddin Ahmed and few others. The flag was made from clothes donated by Bazlur Rahman Lasker, the owner of Apollo Tailors, Dhaka New Market.

A map of East Pakistan (now Bangladesh) was first traced on a tracing paper from an atlas by Hasanul Haq Inu, Yousuf Salahuddin Ahmed and Enamul Haq, at Enamul's room (312) in Quaid-I Azam Hall (now Titumir Hall), EPUET (now BUET). Later the map was painted in the red circle by Shib Narayan Das. On 2 March 1971, this initial version of the flag was hoisted in Bangladesh for the first time at Dhaka University, by student leader A. S. M. Abdur Rab, the then Vice President of Dhaka University Students' Union (DUCSU) The flag was conceived so as to exclude the star and crescent considered as symbols of West Pakistan (now Pakistan).

The red disc on the flag may perhaps also represent the fateful sunset that had taken place according to legend at the Battle of Karbala.

According to CIA World Fact Book, the green used in the flag represent the lushness of the green landscape of the country. On 13 January 1972 the flag was modified. The map from the center was removed and the red disk moved towards the hoist. The red in the center is a symbolic representation of the blood Bengalis shed in the Bangladesh Liberation War.

Design
According to Bangladeshi government specifications, following is the specification of the national flag:

Flag History of Bangladesh? | How old is Bangladesh Flag Design formation? | How to call Bangladesh?