Information Portal » Flags of the World » Flag of Vanuatu 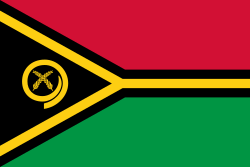 In 1977 a flag of almost the same colours and symbolism as the future national flag was designed by local artist Kalontas Malon and adopted by the Vanua'aku Pati. When the party led the New Hebrides to independence as Vanuatu in 1980, the colours of the party flag (red, green, black and yellow) were chosen to be the basis for the national flag on Independence Day, July 30, 1980. A parliamentary committee chose the final design based on submissions from local artists.

The green represents the richness of the islands, the red symbolises the blood of wild boars and men, and the black the ni-Vanuatu people. The Prime Minister of Vanuatu, Father Walter Lini, requested the inclusion of yellow and black fimbriations to make the black stand out. The yellow Y-shape represents the light of the gospel going through the pattern of the islands in the Pacific Ocean (approximately 83% of the people of Vanuatu profess Christianity).

The emblem in the black is a boar's tusk — the symbol of prosperity worn as a pendant on the islands — along with two leaves of the local namele tree. These leaves are supposed to be a token of peace, and their 39 leaflets represent the 39 members of the Parliament of Vanuatu.

Construction
With a flag width of 180 units, the width of the triangle, from hoist to point, should be 84 units. The height of the flag will thus be 95 units, with the yellow band being 5 units tall, the gold fimbriations are each 6 units tall and the upper and lower (red and green) parts of the field are, thus, 39 units tall each.

Flag History of Vanuatu? | How old is Vanuatu Flag Design formation? | How to call Vanuatu?