Flag of The Republic of China (Taiwan) | Srivideo 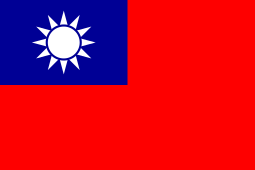 The flag of the Republic of China is the national flag of Taiwan, consisting of a red field with a blue canton bearing a white disc with twelve triangles surrounding it. The disc and triangles symbolize the sun and rays of light emanating from it respectively. In Chinese, the flag is commonly described as Blue Sky, White Sun, and a Wholly Red Earth to reflect its design attributes.

As the islands of Taiwan and Penghu were under Japanese rule until 1945, the flag was not in use in two territories, until ROC took control in 1945. The flag is now mostly used within Taiwan, Penghu, Kinmen, Matsu and other outlying islands, where the ROC relocated to in 1949 after its defeat in the Chinese Civil War.

History
The Chinese Taipei Olympic Committee flag (known in Chinese as the 'Plum Blossom Banner') is used in place of the flag of the Republic of China at the Olympic Games and in some sporting events.
The first national flag of Taiwan was first used in 1663 during the Kingdom of Tungning which had a plain white flag with the character "鄭" (zhèng) on the red bordered circle. The flag of the Qing dynasty was also used from 1683 until 1895 when the Republic of Formosa was declared. The Formosan flag had a tiger on a plain blue filed with azure clouds below it.

During Japanese rule of Taiwan, the flag of Japan was flown in the island from 1895 to 1945. At the same time, when the government of the Republic of China was established on January 1, 1912, the "Five-Colored Flag" was selected by the provisional Senate as the national flag. The "18-Star Flag" was adopted by the army and the modern flag was adopted as a naval ensign. Sun Yat-sen, however, did not consider the five-colored flag appropriate, reasoning that horizontal order implied a hierarchy or class like that which existed during dynastic times.

Following the transfer of Taiwan from Japan to China in 1945, the flag was specified in Article Six of the 1947 Constitution. After the Chinese Civil War in 1949, the government of Chiang Kai-shek relocated the sovereign independent country of the Republic of China (ROC) to the island of Taiwan. On the mainland, the communist forces of Mao Zedong established the People's Republic of China and adopted their own national flag. On October 23, 1954, the National Emblem and National Flag of the Republic of China Act was promulgated by the Legislative Yuan to specify the size, measure, ratio, production, and management of the flag.

Ban in Cambodia
While public display of the ROC flag is generally frowned upon, and may even lead to arrest in the PRC, Cambodia was the first country to outlaw it officially. In February 2017, Prime Minister Hun Sen announced that the ROC flag will be banned from being displayed in Cambodia as a part of its commitment to the One-China policy.

In the "Blue Sky with a White Sun" flag of Lu Hao-tung, unveiled in 1895 in Hawaii. The twelve rays of the white Sun symbolize the twelve months and the twelve traditional shichen, a traditional unit of time which corresponds to two modern hours. Sun Yat-sen added the "Red Earth" to the flag to signify the blood of the revolutionaries who sacrificed themselves in order to overthrow the Qing Dynasty and create the ROC. Together, the three colors of the flag correspond to the Three Principles of the People: Blue represents nationalism and liberty; White represents democracy and equality; and Red represents the people's livelihood and fraternity. President Chiang Kai-shek proclaimed on the National Day in 1929, "As long as a national flag with Blue Sky, White Sun, and a Wholly Red Earth flies on the land of China, it symbolises the independence and liberty of the descendants of the Huang Emperor".

The blue-and-white canton of the ROC flag is often used as the party flag of the KMT. The flag has developed a great deal of additional symbolism due to the unique and controversial political status of Taiwan. At one level, the flag represents a clear symbol that Taiwan is not governed by the same government as Mainland China, as this flag is different from the flag of the People's Republic of China (PRC).

Meanwhile, because it was formerly used as the flag over all of China, the flag has become a symbol of continuity with the ideals of the Chinese nationalism and Chinese reunification movements, and has become a symbol of a connection both historical and current with mainland China. In addition, the flag is derived from the seal of the KMT, and the color of the field of the flag is associated with the KMT party colors.

Some Chinese see the flag as an expression of Chinese nationalism and pride combined with simultaneous disapproval for the current communist regime. Additionally, the flag may symbolize identification with, and admiration for the political thoughts of Sun Yat-sen, and his Three Principles of the People.

One irony is that given the association of the flag with Chinese nationalism in opposition to Taiwan independence, the ROC flag has found an unexpected ally in the People's Republic of China. The PRC has criticized Taiwan independence groups for wishing to change or abolish the ROC flag, and has implied that legal steps to do so would bring a strongly negative reaction from the PRC.

However, the presence of the ROC flag in Taiwan also distinguishes the fact that Taiwan and ROC territorial islands elsewhere fall under jurisdiction of a country separate from that of mainland China, the People's Republic of China (PRC). The hoisting of the ROC flag is even advocated by the most extreme Taiwanese independence supporters, such as Taiwan Solidarity Union members when emphasizing the separate and independently governed systems and territories of the Republic of China and the People's Republic of China in mainland China.