Information Portal » Flags of the World » Flag of Pakistan 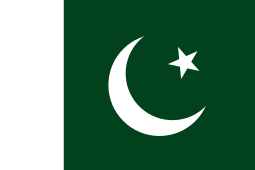 The national flag of Pakistan (Urdu: قومی پرچم‬‎, Qaumī Pārc̱am) was adopted in its present form during a meeting of the Constituent Assembly on August 11, 1947, just three days before the country's independence, when it became the official flag of the Dominion of Pakistan. It was afterwards retained by the current-day Islamic Republic of Pakistan. The flag is a green field with a white crescent moon and five-rayed star at its centre, and a vertical white stripe at the hoist side. Though the green colour is mandated only as 'dark green', its official and most consistent representation is Pakistan green, which is shaded distinctively darker.

The flag is referred to in the national anthem as the Flag of the Crescent and Star. It is flown on several important days of the year including Republic Day, Independence Day and Defence Day. It is often hoisted every morning at schools, offices and government buildings to the sound of the national anthem and lowered again before sunset. A notable flag raising and lowering ceremony is carried out each day with great pomp and enthusiasm at the Wagah Border attended by hundreds of spectators. The leadership of the Muslim League adopted the flag of the Dominion of Pakistan on 11 August 1947. The government of Pakistan has pronounced rules about the flying of the flag. It is to be displayed at full mast on 23 March of each year, marking the adoption of the Lahore Resolution in the 1940s[vague] and the Declaration of the Republic of Pakistan in 1956, and on 14 August in celebration of Independence Day, when Pakistan was carved out from British India as a home for Indian Muslims. The flag of Pakistan is also mentioned in Pakistan's own national anthem in the third verse reading "پرچمِ ستاره و ہلال رہبرِ ترقّی و کمال"‬ which translates to "Flag with the Star and Crescent, the leader of progress and ascent".

The green represents Islam and the majority Muslims in Pakistan and the white stripe represents religious minorities and minority religions. In the centre, the crescent and star symbolizes progress and light respectively. The flag symbolizes Pakistan's commitment to Islam and the rights of religious minorities. It is based on the original flag of the Muslim League, which itself drew inspiration from the flag of the Sultanate of Delhi, the flag of Ottoman Empire and the Flag of the Mughal Empire.

Design
The official design of the national flag was adopted by the Constituent Assembly together with a definition of the features and proportions.

According to the specifications it is a dark green rectangular flag in the proportion of length [A] and width [B] as 3:2 with a white vertical bar at the mast, the green portion bearing a white crescent in the centre and a five-pointed white heraldic star. The width of the white portion [C] is one quarter the width of the flag [A], nearest the mast, so the green portion occupies the remaining three quarters [D]. Draw a diagonal L3 from the top right hand corner to the bottom left corner of the green portion. On this diagonal establish two points P1 and P2. P1 is positioned at the centre of the green portion and P2 at the intersection of the diagonal L3 and an arc C4 created from the top right hand corner equal to 13/20 the height of the flag [E]. With the centre at point P1 and a radius 3/10 the height of the flag describe the first circle C1 and with centre at point P2 and a radius 11/40 the height of the flag describe a second circle C2. The enclosures made by these two circles form the crescent. The dimensions of the five-pointed white heraldic star are determined by drawing a circle C3 with a radius 1/10 the height of the flag positioned between P2 and P3 on the diagonal L3. The circle surrounds the five points of the heraldic star and star lies with one point on the diagonal L3 at point P3 where the circle C1 intersects the diagonal L3. The flag is colored in Pakistan green having standard RGB values (red = 0, green = 102, blue = 0) or with hex triplet #006600 or the HSV value = (h = 120, s = 100, v = 40). The left strip, the star and the crescent are painted in white. The flag is supported from left white side.

Flag History of Pakistan? | How old is Pakistan Flag Design formation? | How to call Pakistan?