Information Portal » Flags of the World » Flag of Algeria 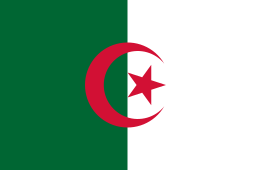 The national flag of Algeria (Arabic: علم الجزائر‎) consists of two equal vertical bars, green and white, charged in the center with a red star and crescent. The flag was adopted on 3 July 1962. A similar version was used by the Algerian government in exile from 1958–1962. The Western blazon is per pale vert and argent; a crescent and star gules.

History
A Sea Fight with Barbary Corsairs by Laureys a Castro, c. 1681. Note the various flags with crescents used by the pirates.
The Barbary pirates of Ottoman Algeria between the 15th and 17th century widely used flags that were emblazoned with one or more crescents. These could however vary greatly in color, with dark red, black, green and white being in use. Besides these, Algerian pirates also used various flags in plain color, such as plain black ones signalling death. Less often, Algerian flags of this time also carried other motifs, such as suns, stars and crossed swords. It is also known that Algiers used an orange flag with a white horizontal sword on it by the early 19th century.

According to algeria-un.org, cited in 1999, the features of the flag are set down precisely, being described as:

Flag History of Algeria? | How old is Algeria Flag Design formation? | How to call Algeria?