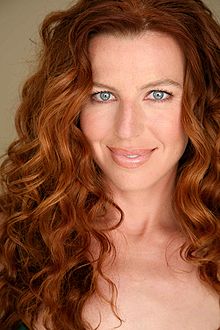 Tanna Marie Frederick (born 11 August, 1979) is a stage and independent film actress who rose to prominence for her title role in Henry Jaglom's Hollywood Dreams, for which she received the Best Actress Award at the 2008 Fargo Film Festival.

Biography
Tanna Frederick was born in Mason City, Iowa where her father David Frederick was a pharmacist and her mother Nancy Frederick was a nursing instructor. She attended school in Mason City, and by fourth grade had begun to play in productions of that town's Stebens' Children's Theatre. As she would later put it, she had "been doing five shows a year for most of [her] life."

Following her graduation from Mason City High School in 1995, Frederick attended college at the University of Iowa where she double majored in theater and political science. She was a regular on Iowa City stages appearing at the Riverside Theatre as "Jill" in Jack and Jill, and at the University Theatre in a one-woman play that she had written herself and titled Questioning Jabe.[3] She would later recall that while at college she particularly enjoyed working with younger playwrights on new works, and that the programs of the university's Iowa Writer's Workshop were formative in giving her an open mind towards "strange, independent and unusual projects."

Frederick graduated in 1999 as valedictorian of her University of Iowa liberal arts class, and shortly thereafter moved to Los Angeles to follow what the actress has termed her "Joan of Arc calling" which happened at the age of 7.

For the next several months Frederick received irregular assignments as an extra on Days of Our Lives, and as an actress in several stage productions including N. Richard Nash's Echoes and Ben Guillory and Danny Glover's production of Toussaint: For the Love of Freedom. Between assignments, she did whatever was necessary to "pay the bills," including work as a waitress.

At one of the rehearsals for Toussaint, a fellow actor mentioned that he had just played a part in a Henry Jaglom film. At the time Frederick had not heard of Jaglom, but following the colleague's suggestion that "supposedly, if you write him a letter and tell him that you love his films, he'll cast you in a movie," Frederick wrote to Jaglom. In a three-page letter she extolled the virtues of Jaglom's film Déjà Vu—even though she had not actually seen it at the time. To her surprise, Jaglom called her back and invited her to a screening, and soon thereafter gave her a job at his office.

In 2002, Jaglom gave Frederick his play A Safe Place (a theatrical version of his 1972 debut film of the same name), suggesting that she tackle it with her acting class. Frederick then went one step further and found a theater company who would produce it. The play opened in September 2003 and ran for three months. That same year Frederick also received her first film assignment, in Helen Lesnick's Inescapable (released 2003). In the drama Frederick plays an ancillary character who travels from San Diego to Portland to meet an old college friend with whom she then attends a conference at her alma mater.

According to Madeleine Shaner in Back Stage West, Frederick's success with A Safe Place inspired Jaglom to also adapt his 1985 screenplay Always (But Not Forever) to the stage. And her "talent gave Jaglom the impetus to switch the lead characters in the play from a wife who was trying to leave her husband, to a husband who wanted out of his marriage." The play, in which Frederick plays the scorned wife "Dina," subsequently opened in October 2005 as Always... But Not Forever.

In Fall 2006, Frederick began work on Jaglom's Hollywood Dreams, a mildly satirical view of the deceptions of the film industry. In the film Frederick plays the lead role of "Margie Chizek," a young woman from Mason City, Iowa who is desperate to break into the film business. The film debuted at the American Film Institute's November 2006 Festival to good reviews, which increased following the film's theatrical release in May 2007. The New York Times observed that Hollywood Dreams was "driven by Ms. Frederick's no-boundaries commitment to her broken character," and that she gave "a performance that [was as] startling as it [was] touching." Her performance as "Margie" also gained her the Best Actress Award at the 2007 Montana Independent Film Festival and the Best Actress Award at the 2008 Fargo Film Festival.

In late 2006, Frederick helped found the Iowa Independent Film Festival to encourage students and local artists to "make great art right in their own backyards" and to "tap into the inspiration that [comes from the event]." According to the festival's website, over sixty films had been submitted for inclusion in the second festival of April 2008.

In mid-2007, Frederick began work on new editions of Jaglom's 1985 film Always (But Not Forever). In both the stage version (directed by Gary Imhoff) and the screen version (this time directed by Ron Vignone) Frederick plays Jaglom's original character, which Jaglom rewrote for her. The play opened in October 2007 as Always – But Not Forever.

In Winter 2007, Frederick signed on for the title role in Jaglom's Irene in Time, a film about the relationships of fathers and daughters, and in which she plays the eponymous "Irene," a girl searching for a long lost father. Both Irene in Time and the Vignone-directed Always debuted in rough-cut versions at the second annual Iowa Independent Film Festival in April 2008.

As of March 2008, Frederick had also begun work on her third film with Jaglom. In Queen of the Lot, a sequel to Hollywood Dreams, Frederick continues in her role as "Margie Chizek" who in the new film has now become a prominent action film star with problems—one of which is a relationship with a "sleazy" tell-all Hollywood reporter (played by Noah Wyle).

In October 2009, Henry Jaglom's new play "Just 45 Minutes From Broadway" opened at the Edgemar Center for the Arts in Santa Monica with Frederick in the lead role. There were over 100 performances of the play, which ended its run August 1, 2010.

In October 2012, Jaglom's film version of Just 45 Minutes From Broadway opened, with Frederick recreating her role of Pandora Isaacs.

Tanna is a practitioner of Taekwondo having earned her 4th Dan Black Belt.

Marathons
Frederick has participated in several marathons including the ASICS, LA Marathon in 2015.