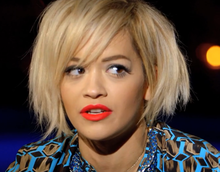 Rita Sahatçiu Ora (born Rita Sahatçiu; 26 November 1990) is a British singer, songwriter and actress. She rose to prominence in February 2012 when she featured on DJ Fresh's single "Hot Right Now", which reached number one in the UK. Her debut studio album, Ora, released in August 2012, debuted at number one in the United Kingdom. The album contained the UK number-one singles "R.I.P." and "How We Do (Party)". Ora was the artist with the most number-one singles on the UK Singles Chart in 2012, with three consecutive singles reaching the top position.
In January 2014, Adidas announced a designer collaboration with Ora for their brand, Adidas Originals. Her second studio album, Phoenix, was released in November 2018. The lead single, "Your Song", reached the UK top ten, and the subsequent singles, "Anywhere" and "Let You Love Me", reached the top five in the UK; the latter single made Ora the first British female solo artist to have thirteen top ten songs in the United Kingdom.
Early life
Ora was born in Pristina, SFR Yugoslavia (present-day Kosovo), to Albanian parents. Her mother, Vera (née Bajraktari), is a psychiatrist, and her father, Besnik Sahatçiu, is a pub owner, having previously studied economics. Ora has an older sister, Elena, and a younger brother, Don. She was born as Rita Sahatçiu (pronounced [sahatˈtʃiu]; surname derived from the Turkish word, saatçi, which means "watchmaker"), but her parents later added Ora (which means "time" in Albanian) to the family surname so it could be easily pronounced.
Her family left Kosovo for political reasons, because of the persecution of Albanians initiated with the disintegration of Yugoslavia. They relocated to London, England in 1991, when she was a year old. She grew up in Notting Hill, in West London, and attended St Cuthbert with St Matthias Primary School in Earls Court, following which she graduated from a performing arts school, Sylvia Young Theatre School. She began singing at an early age.
Music career

Acting
An appearance in an episode of the British drama series, The Brief, was her first television role, at the age of 13. Shortly after, she appeared in the British film, Spivs (2004). In April 2014, Ora appeared alongside Korean popstar, Hyuna, in an episode of Funny or Die called "Girl, You Better Walk." In 2015, she played Christian Grey's sister, Mia, in the film adaptation of the best-selling novel Fifty Shades of Grey, a role she later reprised in the film's two sequels. Ora originally approached the production hoping to contribute to the film's soundtrack and instead was asked to audition for the role of Mia Grey by the director of the film, Sam Taylor-Johnson.
Endorsements
In 2010, Ora featured in a commercial for Skullcandy headphones. She appeared in two Calvin Klein campaigns, in 2010 and 2011. In 2013, she was the face of Italian sneaker brand, Superga, and the new face of "Material Girl", a clothing line designed by Madonna. In September 2013, cosmetics brand, Rimmel, announced their collaboration with Ora for makeup collections. She was the face of two Donna Karan 2014 collections, Resort collection and Autumn/Winter collection. She was also the face of the label's fragrance, DKNY My NY, inspired by New York City. In March 2014, Ora was one of the cast members of Marks & Spencer's "Leading Ladies" campaign. Later in 2014, she appeared as the face of Roberto Cavalli Autumn/Winter campaign. In 2015, she appeared in Coca-Cola and Samsung Galaxy S6 advertising campaigns. Ora appeared in a campaign for German fashion brand, Escada, in 2019.
Design
In January 2014, Adidas announced a designer collaboration with Ora for their line of casual sports clothing, Adidas Originals. Ora designed her own apparel collections for the brand, including footwear and accessories. In 2016, she collaborated with Italian fashion brand, Tezenis, on a capsule lingerie collection. In 2018, Ora co-designed a capsule shoe collection with the Italian footwear designer, Giuseppe Zanotti.
Television
Following the departure of judge Kelly Rowland, Ora was asked to be a guest judge on the ninth series of The X Factor in the UK. She was a judge during the auditions that were filmed at the O2 Arena in London. In 2013, 2014 and 2017, Ora hosted the BBC Radio 1's Teen Awards alongside Nick Grimshaw.
In 2015, she was a coach on the fourth series of The Voice UK on BBC One. The same year, it was confirmed that Ora and BBC Radio 1 presenter, Nick Grimshaw, signed as judges for the twelfth series of The X Factor on the rival TV network ITV, after a bidding war between The X Factor and The Voice UK.
In July 2016, Tyra Banks, the creator of America's Next Top Model, announced that Ora would replace her as host of the revamped show which aired on VH1. Ora hosted the 2017 MTV Europe Music Awards on 12 November in London, at Wembley Arena.
Personal life

Ora speaks Albanian. Her mother is Catholic and her father is a nominal Muslim.[6] Ora considers herself spiritual but not religious.[96] She also considers herself a feminist.
Her maternal grandfather, Osman Bajraktari, was the Albanian consul to Russia (then part of the Soviet Union). While her grandfather was a diplomat there, Ora's mother studied medicine at Moscow Medical Academy. Ora's paternal grandfather, Besim Sahatçiu, was a film and theatre director. Ora's older sister, Elena, is a part of her management team.

On 10 July 2015, Ora was named an Honorary Ambassador of Kosovo by then-president, Atifete Jahjaga, at the Embassy of Kosovo in London. Ora, who was joined at the ceremony by her parents, and former British Prime Minister and his wife, Tony and Cherie Blair, stated she was "overwhelmed" by the honour and pledged to help the youth of Kosovo.

“My parents brought us [my older sister and I] to this country with the hope and the dream that we could get a decent education, which is so important for our hopes and values, and for what we want to achieve in our lives. I grew up in Britain, a country that has given me so much for which I am grateful, but I will always have a special place in my heart for my home town and Kosovo."
—Ora speaking in 2015 on her move from Pristina, Kosovo to London.

On 23 March 2013, Ora performed as a special guest at Bal de la Rose du Rocher, an event organised by Karl Lagerfeld in Monte Carlo in aid of the Princess Grace Foundation. On 1 June 2013, Ora performed at the "Chime for Change" charity concert at Twickenham Stadium, London, which raised funds and awareness for girls' and women's issues around the world. In December 2013, along with other British artists, she filmed "No Place Like Home" campaign with UNICEF UK, in support of their appeal for the children affected by the Syrian conflict. On 7 May 2014, Ora headlined the third annual “Gabrielle’s Gala” fundraiser at Old Billingsgate Market, London, raising money for Cancer Research UK.
On 15 November 2014, Ora joined the charity group Band Aid 30 along with other British and Irish pop acts, recording the latest version of the track, "Do They Know It's Christmas?", to raise money for the 2014 Ebola crisis in West Africa. On 14 November 2015, Ora performed during half-time at David Beckham's UNICEF charity "Match for Children" held at Old Trafford, Manchester. On 9 March 2016, she gave a speech on immigration and the Syrian refugee crisis at the We Day UK event in London, organised by Free the Children.
Discography